China has 85% of the global manufacture capacity of RFID tags, with over 150 RFID companies operating in the country.

According to Xiaoxi He, a technology analyst at IDTechEx, not only will the use of RFID in China become a $4.3 billion market in 2025, but that figure will almost double if it includes the value of tags and readers made in the country and exported elsewhere. Already in 2015 China had 85% of the global manufacture capacity of RFID tags, with over 150 RFID companies operating in the country, Xiaoxi He says.

In this new report titled "RFID in China 2015-2025", IDTechEx provides a full study and assessment of the prospects of the RFID market in China. The research was carried out by IDTechEx analyst Xiaoxi He based on interviews conducted in China in addition to the full knowledgebase of RFID market and business intelligence from IDTechEx led by Raghu Das, achieved over 15 years of studying the entire RFID market.

Highly profitable government-led projects moving to market led projects
The development of RFID is heavily supported by the Chinese government, according to IDTechEx. The Chinese RFID market can be divided into two separate types: government-led and market-oriented. The supplying companies are correspondingly separated into two types as well. AISINO, Shanghai China Card, CEC Huada Electronic Design are companies focusing on government projects and are strongly influenced by the government support. While companies such as Invengo, Arizon RFID, Hangzhou Century have less government influence and are more market-oriented.

IDTechEx found that most government-led companies are also state-owned companies. They mainly focus on the Chinese market, they have a large amount of capital, are given more opportunities and are enjoying high profit margins because the government projects are less cost-sensitive. Those companies also play an important role in projects such as national ID cards, passports and subway ticket applications. The entry barrier is high for those applications, as the suppliers need to have good government connections and relatively mature technologies. On the other hand, the market-oriented companies are facing a more competitive environment, especially in the tag-assembly sector. In 2014 the market segments for RFID in China are as follows: 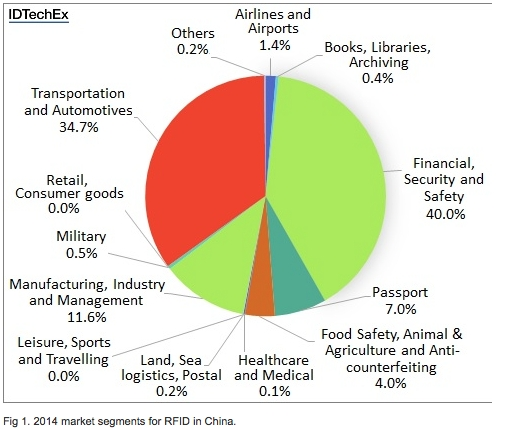