Orion’s production increased as a result of the added ability of the Evolution press to print multi-color labels on different substrates. 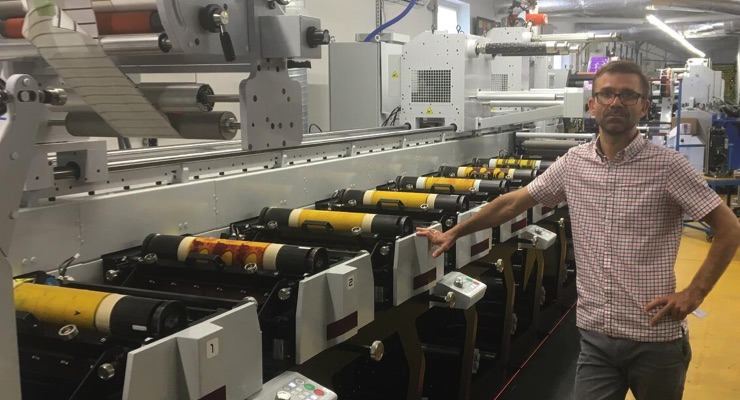 Orion Znakowanie Towarow, a print service provider in Wroclaw, Poland, has served a number of customers within the fast-moving consumer goods (FMCG) market for over twenty years. Specializing in label production, Orion was one of the first Polish companies to implement Mark Andy’s newest Evolution Series flexo press following its debut at the 2019 Labelexpo trade show in Brussels.

“We continue our successful co-operation with Mark Andy,” commented Marek Dziewanowski, President of Orion Znakowanie Towarow.  “It’s the third press from this American vendor purchased by our company during the last four years. The investment is another natural step of modernization of our equipment. Evolution Series replaced the long-serving device from another vendor and significantly increased our potential in terms of label production to include more advanced and complex finishes.” Orion’s production also increased as a result of the added ability to print multi-color labels on different substrates.

“The Evolution Series is based on a printing platform known from Performance Series P7, that we have used since 2017; it is a significant support for that press as well,” Marek Dziewanowski says. “Due to their compatibility, we may do the same jobs in both presses or use them alternatively.”

In addition to the most recent installation of Evolution Series press and the Performance Series P7, Orion’s facility also includes a Digital Series HD which was purchased mid last year.

The Digital Series HD allows for efficient production of smaller runs of highly finished labels. Marek Dziewanowski confirms that the device met all his expectations: “Due to our investments, we have an appropriate balance in coverage with all three Mark Andy presses on our production schedule. Digital Series HD works in a three-shift system and is highly loaded, especially in the current, more difficult market situation. We are very conscious that pandemic hit our customers from different industries, but also hit end consumers as well. Our business became more flexible after investing in both conventional and digital technologies, which became our strong advantage and let us proceed with the planned investment in Evolution Series press with assurance.”

“Despite the ongoing restrictions and limitations that are set in place as a result of COVID-19 pandemic, we also try to fulfill the deadlines for our product deliveries. However, all of our actions consider the procedures and protocols set forth by law or the internal rules of a printing house,” added Lukasz Chruslinski, Sales Manager, Mark Andy Poland. “Both parties were incredibly satisfied that the delivery, installation, and start-up of the press went smoothly and was completed according to schedule.”

Przemyslaw Polkowski, Director Mark Andy Poland, concludes: “Implementation at Orion Znakowanie Towarow is another successfully finalized agreement with the Polish customer, proceeded in this difficult time. Therefore, we deeply thank Mr. Marek Dziewanowski for his trust to Mark Andy as a vendor of the press, but also as a strategic partner in his investment schedule and production run by his company. We are conscious of our responsibility when we think about three Mark Andy presses that decide about efficient and timely label production in which Orion is specialized. We also hope that the Evolution Press, which follows P7 and Digital Series HD, will be another significant strengthening of Orion’s equipment park.”