Meech's Matt Fyffe discusses the problems associated with static charges and the solutions. 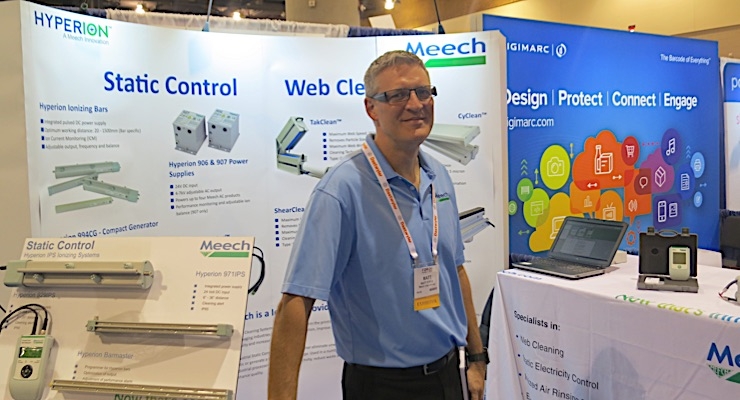 Now more than ever, brands are under pressure to meet strict health and safety standards – all while dealing with high demand and the pressure of delivering consistent, visually striking products.

To meet such high levels of quality and cleanliness, production lines need to run as efficiently as possible – meaning wastage and breakdowns must be kept to an absolute minimum. One of the biggest threats to consistency and low cost of ownership on labeling lines comes in the form of static generation. Static can be generated in many ways: a web being unwound from a roll (separation), for example, or from the web running over nip rollers on converting machinery (friction). In some production environments, humidity levels and electricity from other equipment can also lead to an increased level of static.

When not controlled, static charges can cause a myriad of problems. Loose, airborne debris can be drawn to the surface of the web, which not only contaminates it but can also lead to problems further down the production line, such as machinery blockages or insufficient print quality, whereby static’s presence can also cause print work to appear blurry or lead to digital printheads not working properly. All such issues lead to higher levels of wastage and maintenance, costing time and money.

Static control
Static control equipment typically comes in the form of a DC ionizing bar, which directs positive and negative ions of electricity at the web’s surface, neutralizing any charges present.

Most modern ionization technology, such as Meech’s Hyperion range of DC static control bars, are available in formats that suit short, medium and long-range applications. Automated static control, such as Meech’s SmartControl Touch, enables operators to see the performance information of multiple static devices and remotely control them via a mobile phone, tablet, touch screen or PLC. SmartControl Touch can also be connected to static bar controllers, which automatically alter the levels of ionization supplied from the static bar.

While eliminating static is crucial for labeling production, cleaning the web is also vital; that’s where web cleaners come in.

Web cleaning
Providing an ideal solution to contamination issues, web cleaning is paramount to the label converting industry. As established, static charges can lead to loose, airborne contaminants being drawn to the surface of the web material – but the web itself, depending on its speed of movement, can also attract debris. A boundary layer, created by the air stream, can easily be formed on a moving web, and the faster the speed, the thicker the layer and the more contaminants that can be trapped within it.

Breaking through the boundary layer with web cleaners is the most effective way of eradicating the impact of contamination.

Web cleaners typically come in two forms. For label converters, contact systems are traditionally enlisted on narrow web presses in the form of tacky rollers, which make contact with the full width of the web, penetrating through the web boundary layer and physically picking up dry, unbonded contaminants and removing them from the web surface. These types of systems provide excellent cleaning for filmic substrates on slower moving lines.

Non-contact systems, such as Meech’s CyClean, utilize compressed air, which prevents damage to potentially sensitive web surfaces. The CyClean is an example of “blow-and-vacuum” technology – it can clean both sides of the web, stripping the boundary layer of contaminants which are captured in the airstream and vacuumed away. Systems likes these can remove contamination to below one micron and integrate fluid dynamic principles to deliver higher levels of cleanliness.

With their compact design, web cleaners are simple to integrate and help production lines to run smoothly and reduce the amount of waste produced, leading to cost savings, greater levels of productivity and reduced environmental impact.

Taking action now
With hygiene and quality imperative to production lines, web cleaning and static control equipment are must-haves for label and packaging manufacturers to ensure production lines run as smoothly and effectively as possible.

It is important, prior to the investment of such equipment, that a thorough analysis is carried out on the way production is currently undertaken. There are various forms of web cleaners and static control devices and investing in the right type will require some investigation into where static charges are forming, how much is being generated and where it impacts most.

Working with a leader in the field of static control will help any company come to a quick conclusion while also ensuring they are taking on board the most reliable, efficient equipment that can guarantee fluid, cost-effective production.

About the author: Matt Fyffe is the VP and general manager of Meech USA and a frequent contributor to L&NW.
Suggested For You