New to the US market, the Mexican beer brand taps into the Hispanic Millenial’s bi-cultural passion. 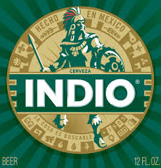 The orginal Indio label pictured here has gotton a 120-label makeover.
When the casual beer drinker thinks of Mexican beer, the brands that probably come to mind are Corona and Dos Equis, and maybe, if they know their stuff, Tecate, Pacifico or Modelo. These beers are widely distributed and available in the United States and throughout the world. A brand that you might not have heard of, or at least not until recently, is Indio. First brewed in 1893 under the Cuauhtémoc brand, its original label featured an Aztec emperor, drawing on Mexico’s rich history.

In 2010, Heineken, one of the world’s top four leading beer companies, acquired Indio’s owner Cuauhtemoc Moctezuma Brewery. Two years later, Heineken launched Indio in the US. The company concluded that a group of Hispanic consumers that fall under the “millenial” demographic was being overlooked by beer brands. “The millennials are basically acculturated Hispanics that are very influential to the rest of the Hispanic community because they are fusing their Latino background with their everyday urban lifestyle,” said Felix Palau, VP of marketing for Heineken's Tecate and Indio brands.

Heineken brought Indio into the US, according to Palau, was because the company saw a strong connection between the brand's consumers in Mexico and adult bicultural millennials in this country who are passionate about alternative art and music. “Their similar lifestyles presented a great opportunity for us and our distributors to speak to one of the fastest-growing segments of the US Hispanic population,” Palau said.

With Indio’s entrance into the US, Heineken launched a marketing campaign targeting the demographic it was after – Hispanic men between the ages of 21-26.  As part of the brand's pre-launch strategy, Heineken USA hosted "The Indio Experience," a series of Indio Road Shows for distributors and retailers in key markets to introduce the brand and offer insight about its target audience. This was accomplished via live performances from DJs and bands, “Spanglish” tutorials and brand sampling. Indio's non-traditional marketing efforts were designed to mirror its target consumer and include online communication, digital advertising, out-of-home postings and murals, and influencer sampling. 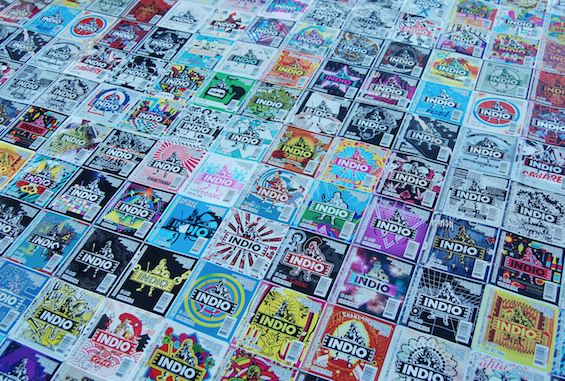 A gravure print run for Indio produced 120 unique beer labels.
Today, the marketing effort continues. The Indio brand is celebrating its 120-year anniversary, and to mark the occasion, Indio reached out to its consumers for new label designs. After thousands of submissions, Cuauhtemoc Moctezuma Brewery picked 120 of the best designs to be featured on the anniversary’s promotional bottles.

To make the concept a reality, Cuauhtemoc  Brewery relied on Constantia’s Haendler & Natermann (H&N) for label printing. Constantia is the company that made label industry headlines in 2013 with its acquisition of beverage labeling leader Spear.

Utilizing the gravure print process, H&N was able to recreate the colorful and vibrant 120 label designs on the same run. Due to the randomized print pattern, Cuauhtemoc Moctezuma Brewery did not have to worry about pack consideration to ensure a randomized grouping of bottles. So, it is likely that a six-pack, 12-pack, or case of Indio beer will likely have bottles with different labels.

For their efforts, this labeling process has since been awarded Constantia’s 2013 Innovation Award.