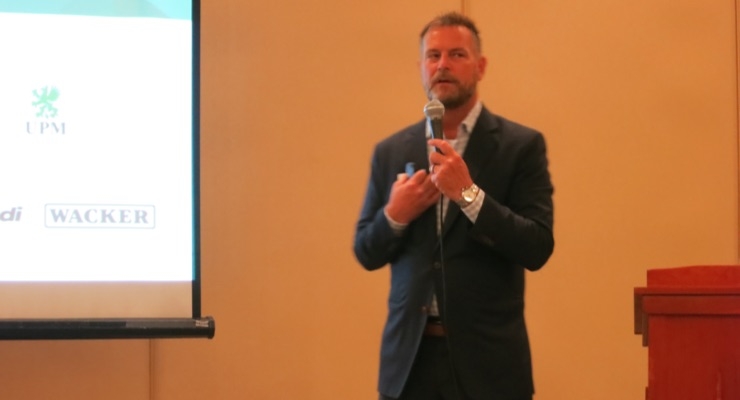 As a precursor to Labelexpo Americas, AWA Alexander Watson Associates hosted the eighth edition of the Label Release Liner Industry Seminar. The event, geared toward suppliers, producers and users in the pressure sensitive and release liner market, played host to more than 90 guests on September 12, 2016, in Rosemont, IL, USA.

In 2015, the event received over 60 delegates from 20 countries. In addition to a comprehensive speaking schedule, the seminar provided attendees networking opportunities and an interactive workshop on release liner recycling.

Corey Reardon, president and CEO of AWA, welcomed attendees and provided a market overview. According to AWA, the pressure sensitive label market accounts for over 50% of release liners produced and utilized.

Whether labelstock or other various applications, 45.9 billion square meters of release liner are currently in production. The Asia-Pacific region makes up the largest portion of the market at 37%, while North America and Europe each manufacture roughly 28%. Reardon’s 50% figure includes primary and VIP labeling.

Glassine/SCK paper is the dominant substrate used in the release liner market, as it accounts for more than 50%. Although labeling is slightly below the average, release liner technology is growing at an annual rate of 4-5%.

According to Reardon, release liner sustainability is of the utmost importance. “Recycling–environmental and sustainability concerns–is probably one of the most talked about and one of the most important issues facing the release liner–and particularly relative to pressure sensitive labeling–industry today,” said Reardon. “There’s not a quick fix answer. There’s not an emergency that we need to create, but it’s there, it’s real.”

Dan Muenzer, TLMI chairman and Constantia Flexibles’ VP of marketing, delivered a presentation entitled, “Is This Label Thing Ever Going to Slow Down? Phew!” which analyzed the rising growth of pressure sensitive labeling, and how various technologies–including smart labeling–could impact the industry going forward.

Maxine Bayzelon, president of ETI Converting Equipment, followed Muenzer’s presentation with a discussion on “Converting Technologies for Sustainable Labels.” His presentation was built upon the waste management theory of: “Reduce, reuse, and recycle.”

For more pictures of the event, click here for a slideshow.

Cooper said, “linerless labels should be viewed as an opportunity, not a threat.” The group also believed that changing industry dynamics, such as different run lengths, substrates and printing technologies, could be an asset to linerless.

According to Cooper, there is a “severe resistance to change” when it comes to linerless labeling. In addition to brands’ preferring a wide range of shapes not associated with linerless labeling, any migration would require new investments. UPM Raflatac’s Mitchell said that his company has worked on developing a solution to its films in regard to linerless labeling. Typically, there has been difficulty with thin films due to the lack of stiffness. UPM Raflatac has experimented with thinner materials, a tailored release, and a partnership with Catchpoint, using the company’s application technology. These developments should contribute to more viable technology.

During the Recycling Session, the panel analyzed the state of the release liner market and discussed how the industry can better recycle the material. “There’s not a discussion you don’t have with a brand owner talking about sustainability–release linter specifically, but the whole subject of sustainability,” said Reardon. “There’s not a time where you talk to any supplier in the industry and this subject doesn’t come up.

“There’s not necessarily a panacea of the right thing to do,” he added. “It’s certainly a subject that we feel at AWA needs to be in our programs an the discussion needs to continue on an ongoing basis.”

According to Rautalahti, recycling challenges include climate, water conditions, natural resources and bio-diversity, and the growing number of people. The panel looked at several solutions, including downgauging with an eco-design concept, setting higher targets for recycled content, using a circular economy, and preventing waste in the first place. They did concede, however, that we have “a long way to go.”