The association utilized a L&NW survey to frame a breakout session dealing with industry concerns surrounding the virus. 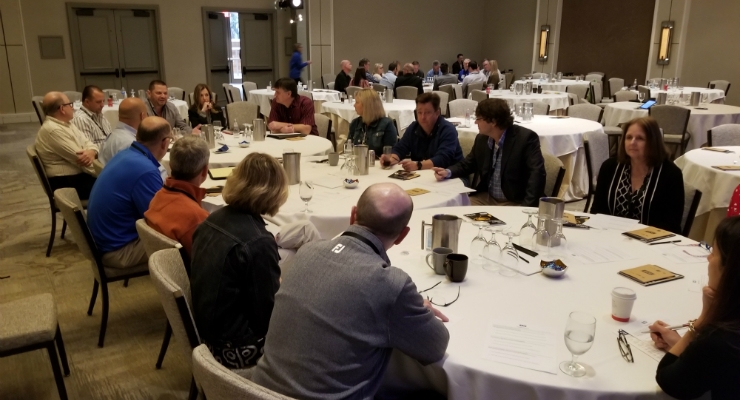 L&NW recently conducted a survey on COVID-19 (coronavirus) to address concerns from all avenues of our industry. The survey detailed in-house safety measures, travel plans, business trends and multiple other topics currently affecting suppliers and converters.

The survey, which was conducted on March 9-10, received 140 responses from a variety of members in the label and packaging supply chain. The anonymous survey saw 63 of the 140 respondents (45%) functioning as converters. The remaining 55% comprised individuals from suppliers in a wide range of industries, including substrates, printing presses, inks and coatings, inspection, corona treatment, and more.

Nearly 52% of the respondents work in management, with the remaining 48% split amongst sales and marketing, R&D and production, and quality control, among others. Multiple company owners also participated in the survey.

According to the data, 73.4% of the participants stated that business – so far – has remained the same, while 20.9% said that business has decreased. Deliveries and transport, as well as scheduled travel, were notably affected.

The survey did feature positive news: 78.8% believe the coronavirus outbreak is a short-term concern, while 8.8% were not sure how it would affect the industry going forward. Several respondents believe the impact could be felt for up to 12 months, with others noting the winter as a likely return to normal.

During the TLMI Converter Meeting breakout session, Christie Wong Barrett, CEO at Mac Arthur Corporation, led a discussion amongst attendees regarding precautionary steps at their businesses. Many said that work-from-home policies are being considered, especially for those who have the ability to work on a laptop outside the facility. In the label and packaging space, however, manufacturing jobs require employees to be in the plant and operating presses and ancillary equipment.

One attendee was quoted as saying we have entered, “The Wild West,” since we have not seen a potential outbreak of these proportions. Many were quoted as saying they would conduct their legal teams for how to proceed in the coming days and months, wondering whether illnesses could fall under FMLA or short-term disability.

Others cited limiting contact, such as keeping 6-8 feet between employees and requiring gloves.

In addition, school closures could affect employees’ ability to be in the office on a daily basis. Businesses could also be subject to government shutdowns of certain areas known to be heavily infected.

The concerns are mostly international, though. Of those surveyed, 61.4% have not limited domestic travel, but several respondents said travel could be curtailed and was currently at the discretion of the employee. Internationally, 62.1% have seen travel affected – especially to areas known to be affected.

Companies have already started to institute safety measures to combat any possible spread. Some companies have brought in outside cleaning services, while others have increased the presence have antibacterial spray bottles throughout their shop. Others have encouraged employees to be cognizant of basic safety measures.

At the TLMI Converter Meeting, many members suggested a plan where members could help other members with orders – especially for members in hard-hit areas. TLMI Engage was suggested as another member resource to combat the spread of COVID-19. Engage has been developed to serve as an Association Management System (AMS), where members can share ideas, collaborate, and gather proprietary market research
Related Searches