In one year, shaftless press technology has leaped onto the flexo scene.

Servo motors are not new. They have been used for years in many industries to power equipment, and are common today on wide web presses, including those that print newspapers. They have not, however, made their way onto narrow web presses. Until now.

Over the past several years, label press manufacturers would observe that the cost of replacing drive shafts with servo motors throughout a narrow web converting machine was prohibitive, and that the industry wasn’t quite ready for such a press. That opinion seems to have changed, and rapidly. The very visible presence of a good many servo-driven presses at Labelexpo 2000 in Chicago is evidence of a coming change in the mechanics of a flexo press.

“The cost has come down and the reliability has gone up,” says Mike Polkinghorne, vice president of Propheteer International, a press manufacturer based in Palatine, IL. “We got into it from using servos on screen heads and on reregistering presses. That’s where we developed familiarity with the product, and we’ve been working with them for four years. When we knew the reliability was there, we said, ‘Why not go ahead and build a press?’ ”

At Labelexpo, Propheteer, Mark Andy, Roto Press International, Gallus and Nilpeter brought new presses that utilize servo motors in one manner or another. Comco International has one on the drawing board. The response of the converting community will determine whether this revving up of servos will indeed constitute a trend, but early returns seem favorable.

What’s a servo?
A simple definition of a servo is that it is a motor that is controlled by an electronic signal. The motor itself is a smallish, roughly cylindrical component that attaches to (in this case) a cylinder on a press and drives it. The power comes from a controller, and the controller is digitally programmed with software specific to the machine in question.

Printing and converting stations on a conventional narrow web press are linked by a drive shaft, which utilizes a good many gears. These gears can mean headaches to press operators when they get old and worn or damaged.

Print stations driven by servo motors don’t have shafts or gears. Oh, there might be a gear or two here or there, but the complicated system of gears that mesh in a shaft-driven press are absent. Servo motors can drive print cylinders, impression cylinders, die cylinders, matrix winders, anything that goes around. 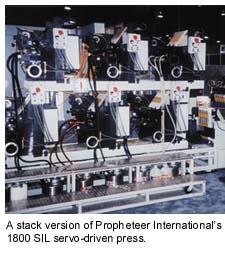 “A servo is different from a torque motor,” says Ken Daming, director of product management at Mark Andy, Chesterfield, MO. “With a torque motor you put X amount of torque to it and it tries to turn. A servo is a positioning type of motor. The load doesn’t matter if it’s within the servo’s capabilities.”

The servo manufacturer that is getting all the business, or most of it, from the press manufacturers is Rexroth Indramat, in Hoffman Estates, IL. “The industry is starting to understand the benefits, and the OEMs are bringing forth the technology and making it available on their machines,” says Jim Hulman, Indramat’s senior account executive for printing and converting. “This technology was brought forth in the newspaper industry six years ago, and now is affordable for small packaging presses. As the technology moves forward, processing power becomes more cost effective.” Hulman adds that the company is discussing servo retrofits with several converters.

The new presses
Mark Andy’s new Model 7000, says Ken Daming, utilizes two servo drive systems. One involves a single servo motor driving a line shaft connected to the pacing rolls (chill rolls) in each station that pace the web and remove the heat. The other system employs servos on all plate cylinders and rotary dies, all connected to a central controller and with no line shafts. “The advantage is that now you have separation of the rotation of the tool and the pacing of the web,” Daming says. “You can do whatever you wish to the tool and it won’t affect the pacing. You can advance and retard registration, and so forth. If it sees a register error, it immediately corrects it with no effect to the web. It can make a lot of immediate corrections, depending on what it sees.” 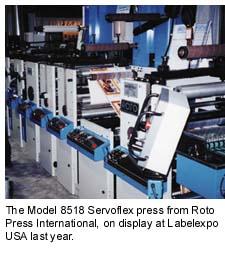 The Model 7000, a UV flexo and rotary screen combination press that sells for over $1 million, is manufactured in partnership with Multi-Print Systems of The Netherlands. It features Fine Dot technology, which utilizes a harder printing plate. Mark Andy sold its Labelexpo press to one US converter, will deliver another in this quarter, and has commitments for others, according to Daming.

“What spurred us toward servo technology,” says Andrew Colletta, president of Roto Press International, Cincinnati, OH, “was the belief that if you eliminate mechanical components, especially from the drive train, you will have a more pure reproduction of the dot.”

In September, Roto Press introduced its Model 8518 Servoflex press, available in widths of 18.75", 20.75" and 24.75". “It has no shaft, no gear box interlinking print stations,” Colletta says. “It uses a servo drive on each print station, eliminating the possibility that a problem on one station will find its way through the press through interconnection.” The servos, which drive the impression cylinders and also the rotary dies, are connected to the controller via a fiber optic network.

Colletta says that the press shown at Labelexpo had just come off the production line. “We didn’t have a lot of time to test it,” he recalls, “but it ran like a dream. It had registration tolerances that were almost immeasurable; the largest was ±.001", and we think it was finer than that. We couldn’t measure it.” Roto Press has since sold several of the presses, he adds.

Propheteer’s 1800 SIL press is capable of running speeds up to 1,000 feet per minute. Servo motors on the 18" press drive the print cylinders and impression rolls, as well as the infeed and the dies. The company today has three installed in converting plants and one on order.

“One of our customers, in Poland, is running extensible film, along with labels, tag stock, a whole range of materials,” says Polkinghorne. “He wanted the gearing out so he didn’t have to worry about gear pitch, and also to be able to program the cylinder ratios to print long or short as needed. When you run thin films they’re going to stretch, and you need to print long because the film will snap back to the correct length. With a servo it’s a programming change; with a shaft press you have to do it with tooling.

Nilpeter, the Danish press manufacturer, introduced its FA 4200 combination platform press at Labelexpo. The press features servo drives on each print cylinder. John Little, president of Nilpeter USA, in Davie, FL, says that the company expects to exhibit the press at Labelexpo Europe this year with additional servo motors on the die stations.

“A lot of servo-driven presses are coming out,” says Little. “And we’ll see a lot more at the next Labelexpo. There are many different ways to use servos — from one to the extreme of nine or 10 on one station. It depends on what you want to drive with the motors.”

Terming such presses “strictly high end,” Little adds: “Everybody and his brother isn’t ready to go out and spend a million dollars on a flexo press. The high end of the market is a narrow peak. It’s an easier sell in Europe. They will reach for a higher quality more quickly, and take a longer payback. In the States they want an immediate payback.”

At Comco International, in Milford, OH, work on a servo-driven press is under way. The company has, however, utilized servos on its presses over the past several years.

“We haven’t used them to drive the whole machine,” says George Strasser, general manager of Comco Printing International, the European arm of the company. “They have been used on some units, such as hot foil, or for single brake stations. To put servos on our multi-substrate press is more difficult than it is on a label press that handles a limited range of material. We handle very thin films up to thick cartons, and it makes the technology much more complex.”

Servo drives aren’t the choice among all press makers. According to Brian Ivens, director of international marketing for RDP Marathon, in Laval, Quebec, cost is one issue.

“Potentially, it offers the ability to overcome some mechanical difficulties, some more so than others, depending on the quality and the ruggedness of the equipment,” Ivens says. “In theory it eliminates the tortional twist on a line shaft. It doesn’t completely eliminate the potential variation of register with speed change, but it can minimize that effect.” He adds that a local maintenance person can’t work easily on a servo drive system. “It is a lot more complex because it’s electronic.”

“The long and the short of it is that for us to engineer a servo-driven press doesn’t mean that we’ll see any savings in the cost of the equipment, the potential maintenance of the equipment, the operation and the performance relative to that cost. There would be no reduced cost and no improved performance. If we went there, we would want to see advantages, but we haven’t seen that.”

Reaching farther
Gallus, the Swiss press manufacturer with a US arm in Philadelphia, has pulled out all the stops when it comes to servos with the introduction of its RCS 330, a 13" UV flexo and rotary screen combination press.

“Because servo technology takes the place of gear boxes, line shafts and couplings, Gallus decided to go full bore and have everything in the RCS press completely servo-driven,” says Bob Yates, the company’s West Coast sales manager. “We have servos for every single function, and we did that on purpose. We wanted the ability to fine-tune every function that an operator would control with a knob. Now each has a servo motor.”

Each RCS print station has a chambered doctor blade instead of a metering roll. After that come the anilox roll, the print cylinder, the impression cylinder, the adjusting arms, the chill drum, and the tension roller, each one driven by a servo motor. The rotary dies are servo-driven, the die pressure adjusters are servo driven, and even the matrix winder is servo-driven.

“We also can set parameters in the software for different substrate thicknesses, different repeats,” Yates says. “It will automatically preset everything in the press to dramatically reduce setup time and waste.”

Yates says converters should shop by comparison for the new technology, and ask some basic questions: How much more does the press cost? What are the net gains in up-time vs. down-time? How many more salable labels can be shipped at the end of a given day compared to current levels? How much less garbage will be thrown away? How many times is the same job run in a year? How much time does it take to set up when re-running the job?

“It might take another five to 10 years, but I think that servos will replace gearing,” says Mike Polkinghorne. “It’s inevitable, and I’m confident that it will happen. We’re really only scratching the surface of the benefits now. In 10 years nobody will be buying a gear-driven press.”