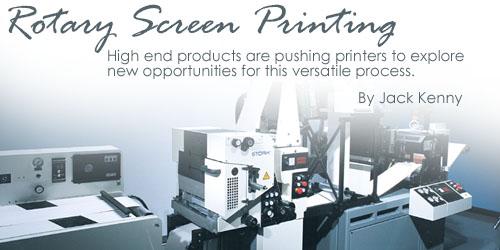 Converters who are deeply involved in producing labels for the top marketers of health and beauty products know the value and practicality of rotary screen printing. They start the press run with a thick and solid application of opaque screen white, giving the substrate a depth not achievable by other means, and go from there to flexo.

By now, the label customers know what screen printing can do for them, and many want more from the application. “It used to be that the printer would apply one coat of opaque base white using rotary screen,” says Tom Kirtz, president of Telstar Engineering, Burnsville, MN. “But now there are a host of products that require more than one screen color, to give the label a good, tactile look.” These products tend to be shampoos and other health and beauty items, mostly printed on film substrates, “that compete to achieve that ‘I-want-to-grab-you’ look on the shelf,” he adds.

Economic doldrums notwithstanding, the market for rotary screen printing is quite healthy. “We have seen strong interest of late,” Kirtz says. “Printers are all looking for new business, which requires new capabilities to be a player. Those who are not in screen printing are looking to get into it.

“Another pleasant surprise,” notes Kirtz, “is that the product manufacturers, the people designing the packaging, are designing rotary screen into their labels. We have had several customers who have had to add screen units to print more than one color.”

“We’re seeing constant growth,” says Terry Trexler, product manager for Gallus Inc., Philadelphia. “There are small peaks and valleys, but for us it’s always growing. There was a time when everyone was putting down a coat of heavy UV flexo ink to duplicate the screen ink look, but no more. Today, 98 percent of presses we sell are going out all UV flexo with at least one screen printing head. We seldom make just a flexo press any more.”

“Label printers are looking at screen printing for opacity,” says John Costenoble, sales manager for Stork Screens America, Charlotte. “The larger companies do more than that, using screen for vignettes and other value-added printing besides white and opacity.”

A simple concept
Flat screen printing is ancient, but rotary screen printing goes back less than half a century. The concept was developed by George Reinke in the early 1960s. Reinke had been brought up in his father’s flat screen printing shop in the 1920s, but it wasn’t until about 40 years later that he developed the first screen-in-the-round with a press to go with it. That press was a two-color machine with a long dryer between the print stations, and utilized rigid wire screens that contained photographic emulsion.

The concept of screen printing today isn’t much different, though the equipment and materials have evolved, as one expects, to the point where they can deliver those solid opaque backgrounds and very fine printed type.


Screens, which come in a variety of meshes, are covered by chemical emulsions, which are the proprietary products of the manufacturers. To prepare a screen for use, a film containing a positive image is placed on the screen and exposed to light. The screen is then washed with water, which removes unexposed emulsion and opens the mesh below the image areas. In exposed areas the emulsion fuses together, closing all mesh openings to prohibit ink flow.

In flat screen presses, which are still used widely throughout the world, the exposed screen is placed over the substrate — be it textile, film, paper, sign board or composite. Ink is deposited in front of a squeegee which is located at one end of the press bed, and then the squeegee moves over the screen to force ink through the mesh.

In rotary screen, however, the squeegee is fixed in position inside the screen, which is mounted in the round and appears as a cylinder. Ink is introduced into the inside of the cylinder, which then rotates past the ink and squeegee, thereby forcing the ink through the mesh. It is at that point on the outside of the screen that the substrate moves past and receives the ink deposit.

The larger the openings in the screen, the heavier the ink deposit. Screen mesh is measured in holes per lineal inch, so that the lower the number the more the ink. At the upper end, screen mesh is manufactured today at around 400 holes per inch for the finest images.

“We’re offering more screen meshes lately,” says Trexler of Gallus, which manufactures its own brand of screen, called Screeny. “There are more meshes for metallic inks, for thermochromatics and specialty inks. They require more of an open weave.”

Specialty inks are attracting the attention of product marketers these days, and screen printers are working with ink companies and equipment manufacturers to explore application techniques. “We supply screen equipment to a variety of industries,” says Tom Kirtz. “There’s new interest in industrial products. One example is in the printing of patterns, dots if you will, on a heat-resistant pot holder. It’s nothing you’d expect to see in a rotary screen world, but there it is. Rotary makes sense because of the volume, the ability to double, perhaps quadruple, the throughput.”

“We developed a 405 mesh, which we introduced last year at Labelexpo Americas,” says John Costenoble of Stork. “Before that our finest mesh was 305. The 405 was developed for security purposes, for use on bank notes. It gives that three-dimensional ink deposit, and gives a print line of less than 70 microns. That’s really tight for rotary screen print.”

“We’re seeing rotary screen pushed to the limit,” says Kirtz. “At one end of the spectrum is 3-point type. You see that on nail polish vials that list ingredients. With 400 mesh screens you can achieve this, and it looks surprisingly good.”

One fascinating print effect for which rotary screen is the perfect vehicle is emulated embossing. “Wine labels incorporate this type of effect,” Kirtz says. “For example, they’ll print an oak tree using flexo, then they’ll highlight the leaves with 1 mil thickness of varnish, which gives that emulated embossed look. It’s surprisingly simple; as long as you can hold register, it’s there.”

Kirtz adds that glow-in-the-dark inks applied by rotary screen equipment is “a completely new market,” and is gaining prominence in the direct mail industry. “It takes a pretty thick layer of ink to be effective,” he says.

Ink factors
Many inks used in rotary screen are UV curable, particularly in narrow web, but not all. “We have hot air rotary screen systems,” says Costenoble. “When printers are using conductive inks, those are solvent based. Converters who are making RFID tags create the antennas using silver conductive inks.”

By far white ink is the big seller in the narrow web rotary screen market. A change is taking place today in the chemical composition of opaque white to make screen/flexo combination printing easier. It’s called silicone-free ink, and new versions have been introduced by Akzo Nobel, Coates Screen, and Arcar Inks, to name a few.

“It’s the biggest move in rotary screen inks,” says Phil Schick, director of energy curables for Arcar, a division of Flint Ink based in West Chicago, IL. “As of two years ago, every rotary screen ink contained defoamers that were silicone based. Silicone would show up in every ink.”

The problem encountered by combination printers occurred when they attempted to overprint flexo inks onto the highly siliconized screen white. “You used to have to put silicone into your flexo inks or they would fish-eye when they hit the screen ink,” says Trexler. Schick referred to the effect as crawling, or reticulation.

“What happens,” says Kirtz, “is that there might be different silicone values from one ink to another, and it could prevent the flexo ink from sticking on top, resulting in that mottled appearance.”

Now, by eliminating the silicone, the problem is solved. The silicone-free inks tend not to have as much lustre, adds Trexler, “because the silicone gave it the shine.”

Print run speeds using rotary screen are usually between 75 and 150 feet per minute, says Schick. The slower speeds are necessary for adequate curing of the thick ink deposit. “A press with a lot of dwell time between print and cure will run considerably faster,” he adds.

“We see speeds of 150 to 350 feet per minute in the narrow web market,” says Costenoble. Speed is not a limiting factor with our equipment; it’s really the ink and the ability to dry. We’ve run at over 600 fpm, but the inks do funny things at that speed.”

According to Trexler, UV curing determines speed. “With 400-500 watt systems on presses you can run only as fast as the ink will flow. What you’re doing is pushing screen ink through little squares onto the substrate and having it rejoin into a homogenous, smooth coating in one second. That’s the speed-governing factor. It has to smooth out in a heartbeat. On the average press there is probably eight to 12 inches between the printing area and the UV lamp, and you’re trying to run at 100 feet per minute. That’s the limiting factor.” Training
Working with rotary screen units is not difficult, but it manages to make beginners nervous. “Press operators are afraid at first,” says Kirtz. “They’ll say, ‘Oh no, I have to learn another new process’. After they work with our technicians they’ll ask, ‘Is it really that easy?’ ”
Related Searches