The nutraceuticals labeling market is influenced by small customers, short runs and a confusing maze of regulations. 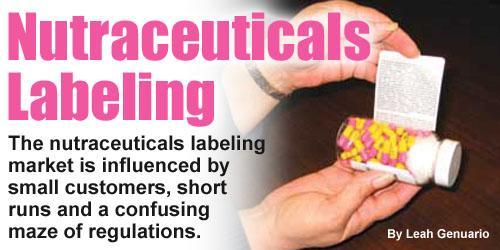 Americans are fat. Very fat. According to the National Center for Health Statistics, an estimated 65 percent of US adults are overweight or obese. But somewhere between Big Macs and Whoppers those same Americans are finding time to reach for vitamins and low-carb bread. It’s ironic but true: This overweight nation is fueling the growth of a lucrative nutrition industry.

According to the Nutrition Business Journal, the nutrition field grew to $63.7 billion in the US in 2003. By comparison, the industry was $20.2 billion in 1990. The journal defines the nutrition industry as covering four sectors: supplements, natural and organic foods, functional foods, and natural personal care products.

Growing awareness of nutrition is occurring throughout the globe. The Freedonia Group, in a recent study titled World Nutraceuticals to 2008, predicted that nutraceuticals chemical demand will grow 6.1 percent annually to 9.6 billion in 2008, serving a nutritional products industry that is $173 billion strong.

An ACNielsen Global Services study, What’s Hot Around the Globe — Insights on Growth in Food & Beverage 2004, found three trends driving the growth of the food and beverage industry. The first is a focus on health, followed by the need for convenience and the growing impact of private label brands. According to the study, out of the seven categories experiencing double digit revenue growth, five offered perceived health or weight loss benefits.

The focus on healthy eating has aided the nutraceuticals industry and therefore the growth of its labels. The term nutraceutical is a marketing word, marrying the terms “nutrition” and “pharmaceutical.” For many, the term nutraceutical has become an umbrella category for all edible and personal care products perceived as having a health benefit beyond basic nutrition.

The industry defined
Not surprising considering its unregulated definition, players in the industry run the gamut. The business is composed of legitimate and illegitimate manufacturers, large and small. Some products lean toward the food industry (i.e., foods with added ingredients such as calcium), some products mimic pharmaceuticals (like herbal treatments for various ailments), and some promise enhancements or beautification that border on the ridiculous (check out the junk e-mail filter for a better idea).

“We have all types of customers. From the guy making bees wax vitamins in his garage to a large pharmaceutical company with nutraceutical divisions,” says Mark Davenport, president of Mid South Graphics, based in Nashville, TN, USA.

Small players
While the nutraceuticals industry is varied, the segment boasts a significant number of small start-up companies, more so than in other industries. Mid South Graphics has been involved in nutraceuticals labeling for more than 10 years, and in that time Davenport has noticed significant changes in its demographic trends and in the size of its orders for labels.

The nutraceuticals industry is young by many standards; even the term nutraceutical was coined only about 15 years ago. Since then, start-ups and small players have flooded the marketplace. But perhaps the market has become over-saturated with little guys? Some argue that the demographic of the industry is already changing.

“The industry lends itself to start-ups. It’s such a fad-oriented industry,” says Elisha Tropper, president of Prestige Label in Burgaw, NC, USA. But, he adds, “It would appear that there is a shakeout going on, in which a lot of small companies were initially able to get their products in, and now all of a sudden there are 10,000 of them selling the same or similar products. I think you are seeing consolidation, or just smaller products getting knocked out because the bigger products are taking over.”

Others agree. “I don’t think you’re going to see the boom again that you did around five years ago. You had a lot of small start-ups, a lot of the companies coming in and out of the Internet. I think the bigger companies are well established and will continue with a certain amount of success and growth. But I don’t think you’ll see as many of the small guys come into it,” says Jim Brunner, director for Uni-Label in Elk Grove Village, IL, USA.

Influence of small players
Whether here to stay or gone tomorrow, the proliferation of smaller start-up shops has had certain implications for label converters.

Perhaps the most notable is the need for short runs. There are several reasons a company will opt for short runs, and their prevalence is leading to great demand for digitally printed labels. Lightning Labels, of Denver, CO, USA, is a converting operation consisting of one HP Indigo digital printer. President Steve Smith says that nutraceutical labels are one of the company’s single biggest vertical markets.

“What we tend to find is that a lot of these companies don’t want to do large runs because what they can say on a label is subject to change on a regular basis. The other benefit of digital printing is that nutraceuticals companies have lots of different products. They may have 10 different products with the same sized label. Digital printing allows them to print relatively small numbers of each and find out whether the products are going to sell,” says Smith.

Prestige Label is a flexo printer with digital capability. Although the company produces a larger volume of nutraceuticals labels each year on its flexo presses, the majority of its nutraceutical orders are digital (and a lot smaller in run length). “So much of the industry is composed of very small players. And the products are niche products that rarely go mainstream,” says Tropper.

The number of small players also creates the need for label converters to play the role of educator.

“A lot of these smaller companies are essentially doing the work themselves. They bought themselves Adobe Illustrator, and they’ve sat down and done their own artwork to keep the cost down,” says Smith.

He continues, “We do a lot of educating. If you don’t ask the right questions, you are going to end up with some upset customers who didn’t realize they didn’t know the right question to ask, and therefore got the result wrong. We put a lot of effort into making sure they understand.”

Brunner, of Uni-Label, hands out detailed instructions to smaller customers. “Especially if it’s a smaller company, we give them a print-out telling them how to build a file and what’s required. We tell them step by step how we would like the file to be.”

And will these small companies eventually turn into large companies? Perhaps some will, but there are a lot of times when they shouldn’t have quit their day jobs.

“Because we deal with a lot of smaller start-up companies, we find that many of these labels never get reprinted. Therefore, you have to come to the conclusion that they haven’t succeeded in what they were trying to do,” says Smith. “We see a lot of short-term customers.”

Mid South Graphics is a flexo house that deals with nutraceutical customers that are generally more established. While it doesn’t see fly-by-night customers, there are many products that come and go.

“We have a handful of nutraceutical companies, some very large, some very small,” says Davenport. “Some of the orders repeat every single month. A lot of them don’t though — a lot are only one time shots.”

“Some of these guys want their label to look like it came out of a big pharmaceutical company: really plain and very professional. Then there are some that just go crazy with the artwork. And there are others that make the label look earthy,” says Davenport.

Brunner says that today, his nutraceutical customers are mainly concerned with shelf appeal. “If your product is sitting on the shelf with 100 brands, you’ve got to stand out. Now, more than ever, it’s not one or two colors with your name and Vitamin E on there. You need the flash of five, six, seven, eight colors and nice artwork.”

If regulations became more stringent in the future, however, that would probably change. “I think you’d see a lot of the color and fancy labels go away very quickly, because the cost of the regulations itself would drive the cost of that label up. In doing so, the companies are going to take away fancy labels to cut cost. It will go more the way of pharmaceuticals,” he adds.

Certain design themes pop up continually in the nutraceuticals industry. “They are targeting an ideology — natural herbal solutions,” says Tropper. “In a lot of the cases, the two design themes that jump out are nature themes: flowers, fauna, things like that. And you also get images of really healthy bodies.”

Along the same lines, earth tones are commonly seen in nutraceutical labels. “As a direct comparison, we do a lot of hot sauce labels. They tend to work on making their graphics and designs exceedingly eye catching, vibrant colors. In the nutraceuticals business, my impression is that it’s more laid back, subtle. The color is nowhere near as vibrant.”

Regulation quagmire
Some converters say that current — or the possibility of future — regulations have also fueled the need for extended text labels. Extended text labels can be found in a variety of constructions — taking the shape of booklets, fold-outs, and peelable and resealable two-sided labels.

Ampersand Label, of Garden Grove, CA, specializes in extended text labels. It started pursuing nutrition supplement customers in the 1990s after the DSHEA act (US regulations governing these products) went into effect, and the nutrition market makes up a huge part of its business.

“More than 50 percent of our company’s business is in the nutraceuticals business. We have seen growth in the nutraceuticals industry every year and feel it will continue in the future. This is why we have spent so much time developing extended text labels to meet these demands,” says John Garrison, Multivision product representative, nutrition supplement industry.

A lot of emphasis has been placed on regulating the nutraceuticals industry in the United States. Product labeling was brought to the forefront in 1990 with the Nutrition Labeling and Education Act. Another notable piece of legislation is the Dietary Supplement Health and Education Act of 1994 (DSHEA). And last November, the US Food & Drug Administration issued a guidance document titled Substantiation for Dietary Supplement Claims Made under Section 403 (r)(6) of the Federal Food, Drug and Cosmetic Act.

Some argue that despite the glut of government information, this has not helped define what should and shouldn’t be on a nutrition label. “One of the issues with nutraceutical labels is the haziness of the FDA regulations,” says Tropper. “From an informational standpoint, it is murky as to what the requirements are, and the requirements are constantly evolving.”

Sometimes text changes because of pressure from the consumer. “I have seen many changes in the nutraceuticals industry over the last few years, one being the addition of warnings to the product label. With juries awarding huge settlement for injuries due to lack of adequate warnings on the product label, we have been producing more and more extended text labels with the warnings permanently affixed to the bottle,” says Garrison.

With the tangle of regulations and recommendations out there, should narrow web converters play legal consultant when it comes to nutraceutical labels? That, some say, could raise legal questions.

“We get situations where customers will say, ‘Is it OK to put the following words on my label?’ To be honest, we run away from that. That’s not what we specialize in. We are essentially a print shop,” says Smith. “We just cannot accept any responsibility for advice. It’s just not our role. That doesn’t cause us too much pain, most of the time.”