Decoration, security, RFID, and now braille imaging are among the many capabilities of this versatile printing process. 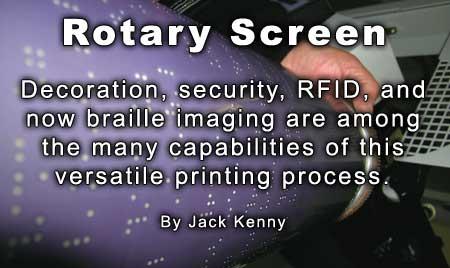 Rotary screen printing in the narrow web segment traditionally was viewed as a high-end add-on for those converters pursuing the top markets who were willing to make a serious investment in the technology. Changing markets, technologies and competition have raised the profile and the desirability of rotary screen. For some of those who understand its capabilities, one unit simply isn’t enough.

Because the quantity of ink applied to the substrate is vastly higher with screen printing than with other processes, screen is desirable and even required for some applications. Beauty packaging long has used screen printing to achieve the tactility that sets such products apart from the crowd. Screens are used to apply pattern adhesives to a variety of converted products. Iridescent and scratch-off coatings benefit from screen as well. Two of the more recent  areas where screen has made itself welcome is in the printing of RFID antennas, and in the creation of braille information on a multitude of products.

Stork Prints, headquartered in Boxmeer, The Netherlands, is a major supplier of rotary screen print units for narrow web presses. The company has a proprietary manufacturing process that produces a screen with no woven mesh. Recently the company has been working to make its technology accessible to more companies in the small to medium-sized range, those with limited budgets. The result is the RSI Compact, a smaller variation of the RSI (Rotary Screen Integration) module. Like the standard unit, it is built onto the press, above the main frame, and has the option of sliding to any position in the print sequence. The Compact has restricted repeat size ranges (12" to 18") and widths of 10" and 13". Top speeds are around 100 meters per minute (325 fpm). The company also has designed lightweight units for certain hybrid presses.

“Many printers see a need to break into new markets, but it’s not always easy to predict how quickly the uptake of screen will be when you’re starting out with the process,” says John Costenoble, sales manager at Stork Prints America, Charlotte, NC, USA. “The new range of units is proving popular for a smaller label printer especially, because they alleviate the risk and give a faster return on investment. For this reason we are seeing growing interest from label converters in our new generation of units.”

Varnishes are a popular finish on wine labels, and can be used to create raised images, smooth shining solid areas, or fine line patterns that appeal to both the tactile and visual senses. “Our customers are creatively using it to emphasize a unique feature, like a brand name, a logo or icons,” says Wim Zoomer, account manager at Stork Prints in Boxmeer. A gloss varnish over a matte solid area, he adds, is a more subtle approach.

Not all rotary screen printed package and label applications are decorative. Today, a package increasingly has to carry identification features. One effective anti-counterfeit feature that can be applied using screen printing is the continuous iridescent stripe, printed with solvent and water-based inks using seamless screens. Another is the scratch-off feature, in which an opaque layer of metallic ink is required when offering tamper-evidence and anti-counterfeit protection. This can be created in one pass with rotary screen printing.

Eberle Druck, a printer in Vienna, Austria, specializes in pharmaceutical and securities printing. The company prints labels and boxes with accompanying instruction sheets. The company has acquired a Gallus KM 410 press and is making use of screen printing in three areas: finishing, counterfeit protection and braille printing.

“As a pharmaceuticals print shop, we are in a global marketplace that is being driven even further by European Union (EU) enlargement. So it’s hugely important for us to constantly examine all processes with regard to cost-effectiveness and adapt them,” says Martin Schmutterer, managing director of Eberle Druck.

Using its Gallus screen equipment for package finishing, Eberle is focusing on appealing to the sense of touch at the point of sale, targeting cosmetics and luxury packaging.

“The possibility of using rotary screen to print braille on pharmaceutical boxes, rather than embossing it, breaks new ground,” says Schmutterer. A new EU directive relating to medicinal products for human use states that the European pharmaceutical industry must include the name of the drug in braille on all boxes by mid-2006. This regulation must be implemented into national law in all EU member states, which puts pressure on the pharmaceutical industry. Eberle Druck ran a variety of trials with braille screen printing which revealed that screen printing meets requirements with regard to braille legibility and adhesion of the dots to the cardboard.

Eberle Druck has more than 10 years’ experience in braille and has developed its own embossing process. Composition of box material, location of the braille on the container and even handling have an impact on the functionality of the braille. According to Schmutterer, printing braille using the rotary screen printing unit allows the form of the dots to be predicted and prevents them from losing their shape.

“As braille is to be put on every pharmaceutical box in the future, setup times represent a cost factor that mustn’t be underestimated,” he says. “A screen can be exchanged in a couple of steps and the braille can be printed on the box.”

In Leverkusen, Germany, Koehler Etiketten installed Stork Prints’ rotary screen technology to meet the braille challenge. According to Berno Mattern, technical managing director, “Our customers wanted to add braille to the package with maximum flexibility. The answer therefore was to make the braille a colorless varnish on a separate ultra-clear 60µ polypropylene label, which can be applied anywhere on the pack and allow the graphics or text underneath to be read by sight.”

One of Koehler’s customers, Mattern says, was looking for braille to be applied to no fewer than 1,400 of its products this year alone, so keeping control of consumable costs was a concern. Embossing was ruled out because the braille dots would be  compressed and be difficult to read. A combination AB Graphic flexo and Stork rotary screen line was chosen, at a width of 16".

Braille is printed with a UV varnish, which means that underlying information can be communicated to sighted consumers at the same time. Various printers have reported braille printing speeds of higher than 40 meters per minute (130 fpm), with thicknesses that can reach 300µ.

Among the many specialties at Luminer Converting, in Lakewood, NJ, USA, is the application of pattern adhesives to a broad variety of substrates. According to President Tom Spina, one of the successes the company has achieved is expertise in applying different levels of adhesive (as well as different types of adhesive) in different areas of the package or label. The best way Luminer has found to do this is through screen printing.

“We pump hot melt adhesives through the screen,” Spina says. “These screens have to be much tougher than ink screens. They are hotter, and are made of a more durable material.”

Luminer has been working with galvanic screens from Lebanon Valley Engraving (LVE), a company out of Lebanon, PA, USA, which for years made screens for the textile industry. That particular market has been heading overseas, so LVE has been asking narrow web converters to give its range of products a try.

LVE makes the galvanic screen via an electro-forming process that requires no wire mesh base. The most unusual feature of the product is that the apertures — the openings in the screen mesh — can be infinitely variable. That’s something that conventional screens cannot offer.

“Our proprietary manufacuring technology enables the screen to be made with an infinite number of apertures, meaning that the printer is not locked in to just one mesh amount for the rest of the graphic area,” says LVE President Gary Rhine.

Another unusual aspect of the screen is its apparent strength. “The inherent natural strength of the screen itself imbues long life for the screen,” Rhine says. “Unlike many screens on the market, this product can be simply cleaned and stored for re-use later. When using particulate based coatings like glitter and RFID and so forth, many printers complain about screen tears. The Galvano Screen simply does not tear and subsequently offers a real cost saving advantage to the narrow web printer.”

Asked about the longevity of a galvanic screen, Rhine says: “Galvano doesn’t really even have a life span. I haven’t heard of one wearing out.”

A third aspect of this screen, Rhine says, is that it “eliminates air bubbles because it has no mesh. This provides sharp images and excellent effects when used in braille, tactile printing and doming coatings.”

According to Dan Plash, sales manager for Telstar Engineering in Burnsville, MN, USA, the galvanic screen from LVE has some advantages over conventional mesh screens.

“They can make the wall of the aperture as thick as they want to. Instead of having a mesh opening they can blow a complete hole through. There is no mesh that has intersections, and you can apply a lot of ink in that spot, too,” Plash says. “And these screens are seamless. That’s one of the beauties. The seam is one of the first things to let go when a screen wears out.”
Related Searches