Held in Guadalajara for the first time, the show focused on going green and the region’s rapid growth. 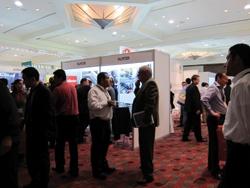 Visitors fill the exhibition hall at this year’s Label Summit
Latin America.
Label Summit Latin America kicked off on April 17 in Guadalajara, Mexico, with a high-energy welcome address by Roger Pellow, managing director of the Labelexpo Global Series. Pellow said that the opportunity for growth in both Mexico and Latin America as a whole is not just significant, but incredible. Estimated rates of growth around the globe – based on input from converters, suppliers, printers, national associations, etc. – show that the Latin American label industry is not one to be ignored. For example, Brazil’s label market is expected to grow at a minimum of 8%. Compare that to India’s healthy 10%, China’s 10-15% and Africa’s 6%, and it’s clear that the Latin American countries are making strides.

Pellow added that converters who consider the environment are going to outshine converters who don’t, no matter where they are located on the globe. “The environment is serious,” he said. “And the message of sustainability has to go all the way down the supply chain.” Pellow pointed out that thinner materials, linerless and wash-off labels are all growing in popularity, and they’re directly linked to environmental concerns. Compliance, he said, is essential. “More and more governments are looking at what we do, and [those] governments will impose compliance on our industry. We will be told what the solutions are if we don’t come up with them ourselves,” he said.
The keynote presentation, titled “The Innovation Imperative,” was delivered by Darrell Hughes,vice president and general manager, Label and Packaging Materials, Avery Dennison North America. Hughes highlighted some global trends in the market today. The top four, he said, are leading brands targeting niche geographies and provinces; end users seeking faster responses and shorter runs; the continued growth of pressure sensitive labels; and the continued opportunities for solutions that are both sustainable and efficient.

Reiterating Pellow’s message about the importance of being green, Hughes cited a study in which 100 converters from 24 countries were asked about sustainability. In their responses, 74% said they had a sustainability program in place. (When the audience here was asked to raise their hands if they had a sustainability program, just four hands went up.) The same study also indicated that 70% of those surveyed would be landfill-free if their matrix waste could be recycled for the same price that they currently pay for disposal, which indicates that the environmental movement isn’t just about cost. It’s about principle.

In addition to considering the environment, Hughes said, those in the label industry need to consider their employees. According to a 2011 survey, Hughes said that the two most important capabilities for business growth are the ability to innovate and the ability to allocate talent. “The rate of technology has changed and so must the leaders of successful organizations,” he said. “We must hire the best and the brightest.”

Edgar Martinez Villarreal, president of ACOBAN and director of Group Etimez, discussed emerging market trends in Mexico and Latin America. According to Villarreal, the biggest growth in printing has been in tickets, and food and beverage labels. Food labels, he said, grew at a rate of 21% last year, while beverages grew at a strong 16%. Villarreal pointed out, though, that Mexico exports about 12% of everything it produces. Of those items, 20% go to the United States. Meanwhile, Mexico imported 35,000 tons of printed labels, most of which came from the United States. He pointed out that Mexico has the great advantage of inexpensive labor, but without other quality controls and technological growth, it will not be enough to keep Mexico’s label market growing at the rate it should be.

“We talk about competitors as if they are local, but they are coming from abroad,” he said. “If we don’t have a business plan for the next five years to increase our growth by 10%, then we are simply living in a different world.”

The second day of the Summit featured Ricardo Rodriguez, labels and packaging segment manager of the Imaging Printing Group at HP Indigo. His session titled “Digital Technologies: Meeting the Rising Demand for Short Runs,” focused on investing in and implementing new technologies, emphasizing the increased pressure for print quality, and featured a Proctor & Gamble case study. While discussing the proliferation of digital projects in today’s market – citing the disappearance of CDs and traditional books as proof – Rodriguez discussed the difference between personalization and customization. “Personalization means it is unique, has been named. Customization means it has been regionalized or changed based on seasons or other factors,” he said. “Some things will never get personalized, but customization is a trend.” 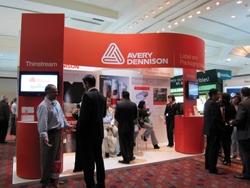 Rodriguez added that, while social media use is growing and is especially useful in terms of marketing, the product as it appears while on the shelf is the single most important factor in sales. “At the end of the day, it will be the product that we will see in front of us that will make it successful or not. The product packaging is the best and last salesperson,” he said. “The first moment of truth, on that shelf across from you, makes you analyze it and decide to take it or not. That’s it. Those few seconds are all you have to make that decision.”

After presenting a case study of his company’s work on Clairol hair dye, Rangel (of Proctor & Gamble) went on to say that people in the United States spend approximately $96 per person annually on Proctor & Gamble products. In Mexico, that number falls to $20 per year; China is approximately $3 per year, and Africa is less than $1.

“Proctor & Gamble is focusing on developing markets, implementing the strategy of developing products that someone who makes approximately $2 per day can afford,” he said.

In order to optimize the converting process, James said that step one needs to be to define your specifications and tolerences. His philosophy, he said, is to “have a toybox with a limited number of toys.”

“A lot of customers have a wide range of different anilox specifications, and the end result is a lot of variability in the printing process,” he said. “It doesn’t matter which technology you buy in terms of presses or plates, you have to be specific and narrow the window down so that opportunity is maximized.”

James emphasized the importance of investing in technology to proof spot colors. “It doesn’t matter which system you have,” he said, “Just have one.”

Juan Da Silva, regional sales director, Latin America, at Advanced Vision Technolgy, next discussed the importance of integrating an automatic inspection system. He focused on streamlining production, identifying and implementing viable solutions, and improving the overall workflow. “We have to change from a visual system to an inspection system,” he said. “The inspection system allows everyone to work in the world as it is today.”

Outside of the presentations, visitors were treated to a high-energy show where exhibitors such as Avery Dennison, UPM Raflatac, acpo, Zeller + Gmelin, Xeikon, Atlas Rotary Tooling Group, and a host of others, lined the main hallway and exhibition room.

The majority of exhibitors showing at this Label Summit said that their company had either made efforts to expand in this region, or has plans to in the near future. Filip Weymans of Xeikon said that his company has made significant expansion into the Latin American region. “Latin America is a big growth market,” he said, “and in 2012, it’s a big area of focus for our company.”

Zeller + Gmelin is looking forward to the iminent opening of its new facility in Queretaro, Mexico. According to David Eguia, sales manager, and Arturo Marquez, sales representative, Queretaro was chosen for its central location, and it is the first facility the company will have in Latin America. While the company is primarily focused on Mexico right now, Eguia and Marquez said that it will eventually open 5-10 facilities throughout Latin America.

Kevin Foos, vice president of sales and marketing at acpo ltd., says that his company has representation in every country in Latin America, including a distributor in Mexico.

“It’s really about international expansion,” he said. “The growth rate in the US and Canada is just about 2-3%. The Latin American market is really underpenetrated.”

In terms of attendance, this edition of Label Summit Latin America reached new heights, as it attracted a record breaking 729 attendees and 70 exhibitors. Held in Guadalajara for the first time, it was the fifth Summit to be held in Mexico.
Related Searches