A changing Middle East is becoming more hospitable to converters and suppliers alike. 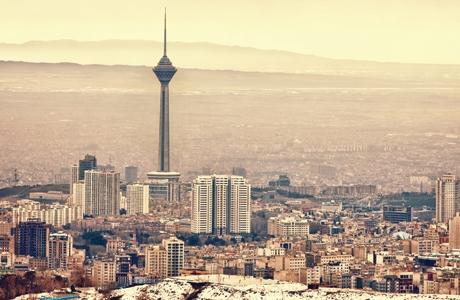 The Middle East is changing. Since Label & Narrow Web last covered this region’s label market, civil uprisings, protests and changes in power throughout the region have been dubbed the Arab Spring. President Obama has called these changes “a critical period of transition” for the region; one that the entire world is carefully watching, no doubt. As the political climate of this region shifts, both label converters and suppliers are expanding business opportunities and establishing or strengthening their presence in the region.

Significant growth
According to a 2012 report by AWA Alexander Watson Associates, total world demand for labels in 2011 was estimated to be 46.85 billion square meters. That’s a growth of 4.5% over 2010. In its report, AWA estimated that the total African and Middle Eastern (AME) label market in 2011 approximated to 2.39 billion square meters. The report goes on to predict significant growth between 2013 and 2014. Though that growth is expected to slow in 2015-16, it is still significantly higher than in previous years.

The report goes on to say that the region is far from being homogenous: “There are wide differences between the oil rich countries surrounding the Persian Gulf, the relatively developed countries such as Israel and South Africa, the changing politics of North African countries, and the poorer economies of Pakistan, Bangladesh, and certain areas of sub Saharan Africa.

“Across the region, label converters rely to varying degrees on the balance between local production and imports of the required label materials. This in turn influences the economics of local production by label format and beneficially or adversely affects the growth of individual label formats and end uses.”

Packaging
Smithers Pira provides information on the packaging, paper and print industry supply chains. Adam Page, business manager, says that the packaging industry in the Middle East is expected to grow as well as, if not more than, the label industry.

Page adds that packaging consumption in Turkey represented a third of the total demand in the Middle East in 2010, which amounted to almost $20 billion. “Medium term growth forecasts estimate an average annual increase in demand of almost 6% in Turkey, well ahead of the rest of the region where growth of under 4% on average is anticipated over the forecast period. The Middle East market is expected to be worth about $24 billion by 2016, with Turkey having increased its regional share to over 35% by this time,” he says.

Advantages and equipment acquisitions
Mark Bouffard, senior marketing communications manager at Avery Dennison, says that the Middle Eastern market has seen very dynamic growth and investments in the latest equipment, particularly in the United Arab Emirates, Saudi Arabia, Egypt and Lebanon. Bouffard says his company has had a longstanding presence in the region. “Avery Dennison has always been a strong supporter, with a European team of experts dedicated to the area, contributing to its development,” he says.

Bouffard says a specific advantage of the Middle East is that it can serve as a hub between Asia and Europe, and “the next continent to develop and serve, which is Africa.” He adds, “On top of that, local markets are also growing. Hence, Mideast label producers will play an important role.”

One way that the region differs from others is that there is sometimes more international personnel to be found, Bouffard says. “Apart from the local Arab-driven culture and managed companies, one can find many Indian, Pakistani and European managed companies with very international personnel from Asia, Africa and Europe which is making life and business so different compared to other continents.”

Mike Russell, international sales director at Mark Andy, says that he doesn’t believe that the Middle East is different than “any other market of the world that did not have a strong infrastructure for label printers.”

Mark Andy has been selling into the Mideast label market since the early 1990s. At that time, Russell says, most of the sales were going to established printing companies interested in branching out into self-adhesive labels. “There was a steep learning curve as these companies were mostly offset printers and needed to be educated on the nuances of flexo printing. The printers who persevered became successful. We have recently seen a surge in activity as new label printing operations are being established to meet the increasing demands for labels in the region,” he says, pointing out that training and retaining skilled operators will always be a challenge along with finding suppliers for tooling, inks, substrates and other consumables.

Paolo Grasso, Mideast area manager for Italian press manufacturer Omet, agrees that this market doesn’t differ very much from other markets. “It differs a lot internally, country by country,” he says. “In general the Gulf is very reachable, with bigger companies managed by Indians. The Mediterranean area of the Middle East is still dominated by small, family-run businesses, which still belong to locals.”

Given the sometimes fractured nature of this region – with significantly different customs and norms in each country, Grasso says the challenge can be connecting with people. “The challenge is to get into peoples’ hearts,” he says. “Whether Indian or Arabic, they’re all very similar to our Mediterranean mentality, so it’s not difficult for us to build personal relationships which come before and go beyond business.”

Recently, United Arab Emirates-based Future Pack – a division of ENPI, Emirates National Factory for Plastic Industries – acquired two Omet XFlex X6 presses. In the last 18 years, ENPI has expanded to become a group of eleven companies. The company supplies labels both within the region and exports them throughout the globe.

“The purchase of two Omet XFlex X6 presses is a clear indication that the company has chosen to invest in high-end technology to improve performance and be able to satisfy the needs of demanding customers in its natural outlet markets,” Omet says of the transaction.

Future Pack’s first 10-color XFlex X6 430 mm was installed in October 2012. Chinna Durai, managing director of Future Pack said at the time, “We have already had good savings on the makeready time and in process waste. We have also seen worthy improvements in productivity compared to the gear presses we have always worked with. We are planning to use this first XFlex for short- and medium-job runs and make good use of its fully-automated registration, quick setup times and job changeover. This will help us increase savings of wastage and time and stay competitive in today’s market. The XFlex will be used also for the printing of wraparound labels and shrink sleeves taking full advantage of its features of high speed and productivity.”

M&A’s and going digital
Mergers and acquisitions have become increasingly common across the globe and throughout nearly every industry, and the label market is no different. According to Grasso at Omet, M&A’s in this region, in particular, can seriously change the buying power of a converter.

“This turns into bigger purchasing power and, therefore, new capabilities for printers,” Grasso says. “It allows printers to approach more international-oriented manufacturers and distributors. Quality standards are becoming even and competition is tougher for the smaller players. Although the market is growing in double digits every year, there is still room for improvement.” 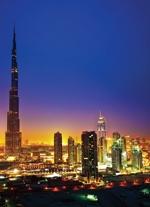 The world’s tallest building, The
Burj Khalifa, in Dubai, UAE
While the vast majority of labels printed in this region are glue-applied, digital is expected to grow as converters increase their capital and have access to more sophisticated equipment. According to Russell of Mark Andy, digital technology has made significant inroads in the pre-press workflow. “As a lot of the label printers in this market come from the offset industry,” he says, “the quality of flexo needs to be equal to or greater than that which they achieve with offset. For this reason, the latest in pre-press and plate technology is critical, and that has recently involved digital technology.”

The higher capital required in order to enter the digital market is relative in a growing industry. Converters in this market, by and large, are not yet able to afford top-of-the-line equipment, though M&As are helping to change that. “Digital press technology is of interest, of course, but not at a high level,” Russell says. “We have found interest in lower-cost digital technology for those looking to fulfill shorter runs.”

Sarah Manufacturing of Sharjah, United Arab Emirates, has represented EFI in the Middle East for the past year. Sarah Manufacturing is the Middle Eastern distributor of the company’s Jetrion digital printers. Ali Mohammadlou, of Sarah Manufaturing, says that local companies frequently merge in order to reduce costs and capture more market share. Mergers, he says, can sometimes help larger companies establish a presence in this sometimes splintered region.

“Larger companies are buying small privately owned businesses to increase their presence in as many countries as possible in the region,” he says. “This is more cost-effective than setting up their own branches from scratch. This of course has been driving smaller companies that have been traditionally producing at a lower cost ­out of business or making them distinguish themselves in order to survive.”

Filip Weymans, Xeikon’s director of segment marketing and business development for labels and packaging, says that though the Middle East label market is not as established as it is in North America or Europe, it is poised to provide solid growth.

“Since 2011 we have increased our focus on the region with the dedicated appointment of Vincent van Horenbeeck, regional sales manager for the Middle East, who in his turn setup a dedicated dealer network,” Weymans says. “Within a short term this resulted in several concrete projects, such as a Xeikon 3300 digital label press and Xeikon DCoat330 sold to a Dubai company, Kimoha Entrepreneurs – one of the most prestigious in the region – and it was the first digital label press sold in this region and as of today is still is the only digital label press in the market.

“Additionally,” Weymans adds, “AMPG, also based in Dubai, acquired during Drupa the first ThermoFlexX 48 in the Middle East region. AMPG said it did so in order to optimize its platemaking department with a state-of-the-art, high-resolution plate imager.”

Weymans adds that while the Middle Eastern region does not have the consumer base the size of North America, there are still many global retailers present who offer primarily global brands. “So a certain amount of the labels and packing materials are used for the domestic market but equally for export,” he says. “This export requires them to be highly competitive and that drives them to implement manufacturing processes that maximizes throughput and minimize both cost and waste. In many cases, they are an example of manufacturing excellence and they also invest in top quality equipment.”

Niklaus Amacker, head of corporate communications at Gallus, says the proliferation of digital has already started in the United Arab Emirates, and he expects it will be spreading throughout the region soon.

“The amount of digital investment in terms of the number of new presses actually going into the market is approximately 15-20% worldwide,” Amacker says. “Yet the amount of digitally-printed product in the global market is between 3-5% per annum. This means there is either low productivity, or that the digital equipment has its limitations in a range of products or segments, in which conventional printing technologies can do better.”