The versatile converter innovates to meet the challenge of complexity.

Over the past several years, Steven Haedrich became aware of a trend in the label marketplace. While the short run trend has been strong and loud, this other one was quiet, yet presented somewhat of a larger hurdle. As president of New York Label & Box Works, Haedrich enjoys a challenge, and he and his team faced it head-on.

“The industry is changing,” he says. “Everyone talks about short run, and I’m not going to argue that, but the industry is also changing to complexity. Clients demand more, from anti-diversion to extended content, from resealable labels to UV inks and rotary screen. They just want more options.”

Not only does New York Label & Box Works provide the complexity sought by its customers, it also develops its own innovations using substrates, adhesives and coatings and markets them to its best clients.

New York Label & Box Works is only 134 years old, founded in Manhattan in 1878 by Herman Hug, back in the days when women wore tea gowns and men sported winged collars. In 1930 Frederick Haedrich Sr. aquired the business. “The story is that my grandfather had been working for his uncle and five cousins and wanted to branch out on his own,” recalls Steven Haedrich. “He bought the business with a partner and he would drive to pharmacies in New York City with my grandmother sitting in the car so he could double park, dropping off labels, and picking up orders.” 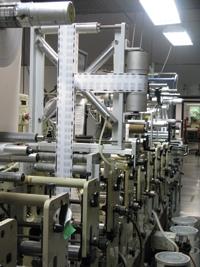 Complex constructions are a New York Label
specialty.
In the 1950s, the senior Haedrich was joined in the business by his sons, Frederick Jr. and Robert, who took over when their father died in 1975. Eventually the business was relocated to Islandia, NY, on Long Island. Steven, son of Frederick Jr., and his cousins became active in the business in the early 1980s. “We ran it together – two generations, two families – until 1996, when my dad and I bought out my uncle and cousins,” he says. His father retired two years ago.

“The story for us is about quality,” Haedrich says. “The 2200 press has allowed us to grow with our clients in complexity. It’s a solid press. It holds registration, it has quick setup, it’s easy to maintain, it’s a great technology, and Mark Andy has great relationships with all the vendors, so you can put any accessory on there that you want. And it’s about quality.”

At some point during its long history, the company moved away from the box business, but has since revived the Box Works part of the historical name and is now producing folding paperboard containers. The box business amounts to about 10 percent of the total operation.

“We are mainly in three industries: food, cosmetics and vitamins, which account for about 80 percent of our business,” Haedrich says. “And we also produce boxes for many of our vitamin and cosmetics customers.” About 80 percent of sales takes place in four states: New York, New Jersey, Connecticut and Pennsylvania.

The complex constructions for which New York Label is known are generated mainly by two desires on the part of the customer: to eliminate other packaging, and to include more information. The need for more information is driven by one of two needs: compliance and multiple languages.

“The government just wants you to tell people what’s in that box,” Haedrich observes. “The consumer wants more information; the consumer demands are far greater in terms of knowledge. The internet drives that: People go online and find out what’s in a product, they find things they don’t like and make the manufacturers disclose what someone is actually buying. It’s almost completely consumer driven.”

In his focus on complexity, Haedrich returns to the value the company has found in the Mark Andy presses. “Complexity is about innovating, where you can help the client either reduce costs or solve their problem.

“We love the 2200. We stick with it because it works. Every time we order a new one, we get it built a little differently. Our latest one is incredibly complex: It has a reverse print station, a middle die station, six UV stations, and we have added anti-diversion printing. This is a very technologically-loaded press and we are using it to satisfy our clients’ demands. It even has extra laminating stations and extra rewind stations.”

The newest 2200 was installed in December 2011, but Haedrich and his team worked with Mark Andy for six months to design the right press for the complex structures. The reversible print station allows for printing on the adhesive or on the back side of the web, because many resealable labels are printed on two sides. “We understood that eliminating the turn bar was going to help us with the predictability of creating a lot of these resealable labels. That was a big improvement.”

The die station in the middle of the press allows for diecutting different shapes in multi-layered constructions. The UV units are employed for adhesives, deadeners and inks. The press also features more idlers for different webbings.
“The more complex your work is, the more value added it is and the more you can charge. That makes a big difference,” Haedrich says.

Solving problems with innovation
Complexity, as Haedrich has noted, has been growing over the past three or four years. “We didn’t realize it was happening. Anti-diversion (overt and covert inkjet applications) is very new. It had been done using sheetfed on folding cartons in the glue line; our system takes it into the press line, and we are laminating over it so that it can’t be scratched off. Resealable labels were invented six years ago, but back then it was one-size-fits-all. Three years ago it became, ‘We want seven different resealable products for seven bottle types and seven jar types,’ and that was big. Three or four years ago the inline extended content labels kind of crept up on us, and then one day you have three 10-color presses, each one accessorized. Your environment’s changed.”

Left: a label with tactile effects;

right: an extended content label
The burgeoning complexity stimulated the creative synapses at New York Label & Box Works, so much so that the company now has a special innovation team. “On the innovation side it is about predictable, consistent quality, labels that perform, and at the end of the day it’s about reducing the cost so that the complexity doesn’t price the product out of the market,” says Haedrich. “We have a two-man innovation team that was instrumental in helping us design this latest press configuration along with the operators and the management team. In the old days it was management team and operators, now it’s management team, operators and innovation guys, researching where we think the market’s going and how we are going to be able to deal with the evolution of change.”

“Our whole company was about solving problems, which then evolved into innovation, which we use to kind of speed the process along, formalize it, and make sure we weren’t just coming up with crazy solutions that weren’t applicable. That department started last July, which was when we started looking at the new press. We realized we needed a press that would take us to the next level, preparing us for the innovative ideas and customer challenges that were in front of us.

“Our business model is built around the Deming quality philosophy, which is, very simply: When you improve quality you lower your costs; when you lower your costs your productivity improves; you pass the savings on to the customer, capture the market, stay in business, and provide jobs. Within the philosophy of quality improvement, it’s broken down to five areas: man, material, machine, method and environment. 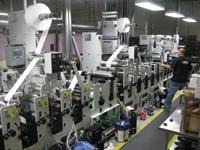 The company enjoys the predictability and
consistency of the Mark Andy 2200.

“When looking at the machine, it has to be durable, predictable, consistent, and able to be
maintained. We have a lot of that with in-house maintenance crew and experienced operators. These presses are very well booked, and the manufacturer supports them very well. We picked Mark Andy as our main supplier years ago based on their focus on quality. Their machines are predictable and consistent, and the operator is not reinventing the wheel every day. It’s a steady machine. Dollar for dollar it pays for itself in a very short amount of time.”

As Haedrich looks to the company’s future, the intention is to build upon recent successes in complex, innovative constructions, such as custom-designed resealables, while continuing to rely on the versatility afforded by the presses to meet expanding client needs. This new direction includes tube-resealable labels, a wide variety of extended content multifold booklets with 4-color process artwork, small resealables, specialty coatings, tactile UV effects, anti-diversion and expanded carton packaging.