This small, digital converter has all the advantages of its large, successful parent company.

Labels in Motion is certainly an appropriate name for this Orlando, FL, USA-based converter, which has grown from a need within its parent company, Xymogen. Xymogen is a manufacturer of nutraceuticals and vitamins, and has experienced extraordinary growth over the last seven years. Both companies share a common goal: moving into the future successfully, and with momentum.

Xymogen was founded by Brian Blackburn, who started his career in the nutritional sciences industry more than 25 years ago.
Before launching the Xymogen line of professional formulas in 2003, he was president of “the most successful independent distributorship for the largest company in the practitioner-based nutrition market.”

Xymogen grew at such a rapid pace that in April 2012, Blackburn decided to move the company to a new 136,000 square foot facility in Orlando. Forty thousand of those square feet are dedicated specifically to manufacturing and packaging. Blackburn’s management philosophy is structured around a happy and positive workplace, which is why the building design also includes spacious work areas, a 24-hour fitness facility, and a basketball court for the more than 150 employees.

When Blackburn decided to make the move into the larger facility, Manon Chin, who worked in Xymogen’s marketing and creative services division, suggested that they start Labels in Motion. 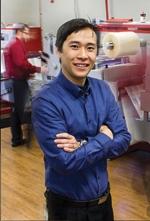 Manon Chin, COO of Labels in Motion
“Xymogen was paying hundreds of thousands of dollars per year to a company in Miami for most of its labels,” Chin says. “My boss was planning this whole building and I told him that it would be wise to invest part of the money to create an all-inclusive labeling facility within the building as well.

“That way, Xymogen’s production could be handled easily and efficiently, and we could turn it into a profit center as well, where we could handle all types of outside accounts.”

Today, Labels in Motion is a 13-person operation, with Chin at the helm as chief operating officer. At this point, its only location is in Orlando, within Xymogen’s herculean headquarters.

About 65% of Labels in Motion’s work is for parent company Xymogen. The other 45%, Chin says, is mainly cosmetic and bath & beauty customers.

“We’ve had some food customers that have been really great for us, and we’re finding out that shampoos is really big for us as well,” he says.

The staff at Labels in Motion includes Chin – who handles most of the one-to-one marketing – as well as seven full-time craft designers, who create labels and brands from scratch for many of the company’s clients.

“All of our craft designers have graphic design experience, and all they’re doing is working with Adobe Suite all day,” he says. “That’s their job.”

Chin says that about half of his customers are looking to establish their brand for the first time, which he is happy to help them with.
“We’ve helped a lot of nutraceuticals companies, a lot of sauce companies,” he says. “We’ve been able to help them in a multitude of ways. Its crucial for us in terms of maintaining and growing our business.”

Labels in Motion reaps many benefits as a result of its successful parent company. Notably, one of them is its sales staff. “We’re a new breed,” Chin says. “We have so many things that most traditional converters don’t have. The Xymogen sales staff consists of 40 national sales members, as well as international sales reps, which is a perk for us. They help us out whenever possible, with referrals for sure, and it’s just a blessing that way. We get to do a lot of one-to-one marketing on leads they sometimes bring in. And there are a lot of sales being generated from our website as well.”

Because Labels in Motion is still in its infancy, as Chin puts it, there is a lot more growth to be expected. With its Xymogen business, the company had around $1 million revenue in 2013. Chin believes that Labels in Motion’s fate will closely follow that of its parent company.

In addition to offering customers full use of a creative design staff, Labels in Motion aims to provide its customers both efficiency and speed. Because of the company’s digital capabilities, Chin says that he can have a turnaround time of approximately three days for customers who are placing reorders.

Chin has various stages of quality control for his customers. The company purchased an inspection machine from GM, and for Xymogen products specifically, quality control is taken a step further. “In addition to the GM machine, we have about five team members for Xymogen-quality label control,” Chin says. “All they do each day is ensure that the label info says exactly what its supposed to say.”

“A lot of our customers have told us that they’ve had labels done by other companies, and after switching to Labels in Motion, they are very satisfied,” Chin says. “You just can’t beat the quality of this press. It’s night and day.”

Once the new press gets delivered, Chin says that Labels in Motion will definitely need to hire. “We’re currently running two-and-a-half shifts per day, but that will increase once the press is delivered.”

For now, Labels in Motion is happy working in a digital-only environment, though Chin says that they will revaluate their needs as the business continues to grow. “If we see the need for a flexo machine as we grow, we’ll invest. There’s just a lot more to it with the set-up time per run, and there’s a lot more waste.”

Chin adds that being conscious of waste is something that is of the utmost importance to Labels in Motion, as sustainability is on the forefront of management’s minds. In fact, it was part of the reason that they chose the Xeikon press.

“The Xeikon toner comes from 100% certified green energy, which is a very important thing for us,” Chin says.

In addition to making sustainable choices, the company also compacts nearly everything on-site. Like many converters, however, Chin has been frustrated with an inability to recycle his labels because of adhesives. “We’re really hoping for better technologies to emerge and to partner with companies who can handle the waste,” he says.

Looking towards the future, Chin says that he really hopes to break into the wine and beer market. “A statistic I read not too long ago is that the US just beat France for the first time in terms of the number of wineries,” he says. “We really want to get into that market in 2014. And, you know, there are quite a few breweries down here in Florida.” lnw