Now identifying with its parent company, the converter is entering new markets and its next phase of growth. 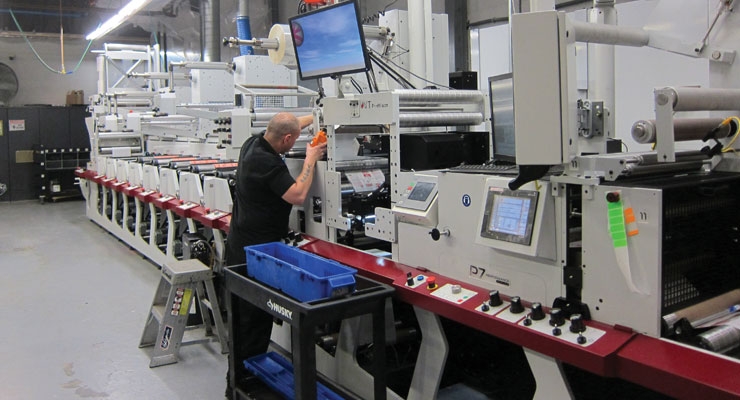 Ten years ago, L&NW profiled Logotech, a pressure sensitive label converter in Fairfield, NJ, USA, who, at the time, was just hitting its stride and enjoying growth after a decade in business.

A lot can change in ten years. For starters, the business formerly known as Logotech is now Tadbik NJ, Inc., identifying with its parent company, Tadbik. Based in Israel, Tadbik has evolved to become a comprehensive packaging company with a global manufacturing presence, as well as a strong export business.

The formation of Logotech was just one part of Tadbik’s active growth history since its founding in 1983. In the early 80s, Ilan Drory, working in his family’s offset printing business, realized there was no PS label production in Israel. Seeing an opportunity, he purchased a Gallus letterpress label press and would sell labels during the day and run the press at night. Drory found success in the Israeli label market, and in 1993 he merged with his biggest competitor, Devikol, who also happened to manufacture label applicators. With the merger, Tadbik controlled 80-90% of the Israeli label market and was also able to offer a comprehensive labeling solution. However, Drory’s plan was to take Tadbik beyond both Israel and labels.

In 1995, looking to enter the US label market, Drory started Logotech. Realizing there were product-decorating options apart from PS labels, in 1997 he established Tadbik Pack in Israel to focus on shrink sleeves and IML. With regard to equipment, Drory’s philosophy was to have the “best of the best,” and Tadbik Pack became one of the first companies in the world to operate an offset and gravure combination press, manufactured by Drent Goebel.

Tadbik invested in CLP in 1999, Israel’s largest flexible packaging company. With the acquisition, annual sales jumped tripled. Two years later, Tadbik TAT (Tadbik Advanced Technologies) was formed, with a focus on smart label technologies. Also at this time, in 2001, Drory launched – under the CLP name – a pouch-making division in Russia.

In 2004, a state-of-the-art factory was built in Tadion, Israel to provide comprehensive support for labels, shrink sleeves and IML. In 2007, Tadbik purchased the remaining shares of CLP. The company had established a healthy export business, with South Africa becoming a particularly strong market. In 2008, a Tadbik manufacturing facility was opened in South Africa.

After more than four decades of growth, Ilan Drory remains Tadbik’s majority shareholder and CEO, overseeing 950 employees at seven manufacturing sites around the globe. For the last three years, the growth rate is about 25%.

From Logotech to Tadbik NJ
While the parent company has been busy growing and evolving, its US label operation, now known as Tadbik NJ, has done the same, with some major changes on the horizon.

Rewind to 2005, and Leslie Gurland was at Logotech, serving as vice president. Today, Gurland is senior vice president and Aryeh Silbert is CEO of Tadbik NJ and chairman of Tadbik USA.

Much like how the label industry as a whole has evolved, ten years has brought some sweeping changes to Tadbik NJ. From the markets served to the equipment used to production areas of focus, the business continues to grow.

“The core markets that we serve have moved from food to HBA (Health & Beauty),” Gurland says. “We lost some of our bigger customers – on the food side in particular – but have gained in other areas. Today, many of our customers also want smaller quantities.” In addition to HBA and food, which remain strong, the company also serves the beverage, pet, industrial and nutraceutical markets. 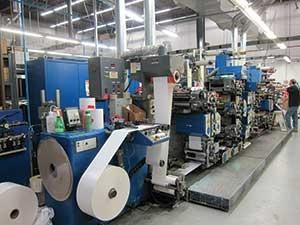 Label printing on a Gallus letterpress machine
Tadbik’s printing technology and machinery have undergone notable changes over the last decade. In 2005, Logotech had four presses: three Gallus letterpress machines and an Arsoma flexo press While two of the Gallus presses remain, so too does the Arsoma. However, a major technology shift came with the 2014 addition of a Mark Andy Performance Series P7 press.

“Tadbik was known as a Gallus house, but we decided to try something new,” explains Gurland. “To go with the Mark Andy P7 was one of the best decisions we have ever made,” she says. “Mark Andy has excellent follow up and gave us tremendous support. And they turned the press around very quickly when we finally came to an agreement. They have a great training program and have been an outstanding partner. And they’re right here in the US. It was a win-win.”

In addition to its flexo and letterpress capabilities, Tadbik NJ also has an HP Indigo ws4050, installed in 2006, which is complemented by an AB Graphic finishing unit. Gurland says plans are in the works for an upgrade to a WS6800, HP Indigo’s latest digital press for pressure sensitive applications. Tadbik is HP Indigo’s biggest customer in Israel, where both companies are headquartered. The flexible division of Tadbik (CLP) just installed the wider width HP Indigo 20000 digital press for flexible packaging.

In line with the Tadbik philosophy of having optimal equipment, the company in New Jersey has upgraded to two Prati rewinders, both of which are equipped with AVT 100% inspection equipment. A third AVT system is installed on the Mark Andy P7.

“When we installed the AVT systems, even though at the time we were heavily into food labels, it made perfect sense,” Gurland says. “Imagine running a job like a pine nut label, for example, and then the roll is spliced with another product and something goes wrong – a consumer could have an allergic reaction, and then you’ve got a recall on your hands.”

The AVT inspection system is a component of Tadbik NJ’s overall commitment to quality. “You have to have quality assurance (QA),” Gurland adds. “In 1995, we were ISO certified but did not have a full-time QA person; our QA from Israel supported us. We made a strategic decision to hire a full time person.

“You have to have a QA manager – and it’s about more than quality,” Gurland adds. “QA is part of our sales team. Every interaction the QA team has with a customer during an audit, or dealing with an issue, allows us to shine as a company and that supports our sales growth. As label and packaging supplier, you have to deliver quality, especially if you want to go after some of the bigger players. And we’re worldwide, so securing business from some of the big brands has been part of our success.”

In 2014 Tadbik recorded the amount of customer-rejected labels at less than 1%. “We had an audit done by a customer and they were in shock. We track not just dollar value but also how many labels – and it was nothing. And that’s where you want to be. Because when you do have a quality issue, all of the departments in the company get involved and you spend time on that issue versus growing your business. And something that we’ve learned from our customers is that they know there will be issues, and the key is not to hide or run from them, but to bring them up. You shine when you stand up and face issues versus running and hiding. When you do have an issue, don’t hide, bring it up.”

The Problem Solvers
While QA is critical, another key component of Tadbik NJ’s business is its role as a problem solver for its customers. While Gurland jokingly calls her staff the “problem busters,” referencing the classic movie “Ghostbusters,” and the iconic “Who’re you going to call…” line, Tadbik takes pride in finding solutions to customer problems. 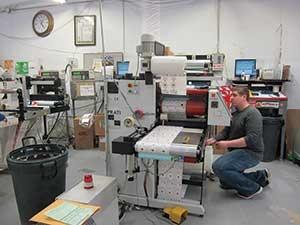 Tadbik NJ upgraded its QA with AVT and Prati technology.

“We just catch stuff, especially in our prepress department,” Gurland says. “Our customers may sometimes get annoyed that we’re asking so many questions, but invariably we find an issue. We recently had a customer that wanted something run quickly, without following procedures and without getting the proper person to sign off. Sure enough, there was a problem and the customer’s QA department contacted us. After looking at the email chain and identifying what went wrong, we built a new protocol specifically for them, which totally diffused the situation. What’s more, they are now using the system we designed in working with their other vendors,” Gurland says. “So often, our customers are understaffed and under pressure. If we can be to some extent their internal account manager, we’re a big help to them.”

Gurland emphasizes that Tadbik NJ’s ability to solve customer problems is due to the people who put in many years of service growing Logotech. Several people have been at the company for over a decade, and have moved into greater roles. The operations manager, who moved from the creative side as art director to the manufacturing side, applies her right-brain mind to a relatively left-brain area of the workflow. The promotion really helped transform us and changed how we work with people,” Gurland says.

“Every successful company is successful because of the people on the floor,” she adds. “If you don’t have good men and women working for you, you will not succeed, regardless of how good your managers are, or how advanced the equipment is.”

A New Hub
A lot has changed since Logotech first opened its doors 20 years go. And as the company enters its third decade, it’s a new beginning with a big shift imminent.

“In 1995, we were a print house – putting ink on paper. Now, we’re so much more than that, as we’re able to provide solutions and add value,” Gurland says.

In addition, in 2009, the company was ISO 14001 certified. To complement this, in 2010, Logotech was awarded TLMI LIFE certification. The LIFE program is designed specifically for the narrow web marketplace and addresses four key elements of the narrow web printing and converting industry: clean production, energy and greenhouse gases, product and environmentally preferable materials and management practices.

The New Jersey operation, Logotech, which is now Tadbik NJ, has always been the smallest of Tadbik’s several divisions. Its 34 employees account for a small fraction of the company’s global workforce, and its product offering, while continuously expanding, has primarily focused on pressure sensitive labels.

This is about to change. In 2015, the company is expanding in New Jersey to bring shrink sleeve and IML manufacturing to the US. The new facility will still be called Tadbik NJ, but the company will be looking at further expansion and streamlining of the business coming from Israel; and this will be done under Tadbik USA. Aryeh Silbert, the former president of Logotech, has returned to the company to run the entire Tadbik USA operation. He is officially chairman of Tadbik USA and CEO of Tadbik NJ. Gurland will focus on business development and sales and is now senior vice president of business development and sales for Tadbik NJ.

When Silbert left Logotech, Gurland became president, and for seven years she ran the company on the operations side. She’s happy to be back focusing on development and sales and is looking forward to start offering her customers shrink and IML, from Tadbik’s new US hub for packaging. “Aryeh is an amazing leader and I am thrilled to partner with him once again,” she says.

“This is the big shift – us adding more production here and acting as the hub at Tadbik USA,” Gurland adds. “Ayreh and I, and the entire team, are looking forward to the next 10 years.”
Related Searches