A service-first approach to big-name customers has this California converter growing rapidly. 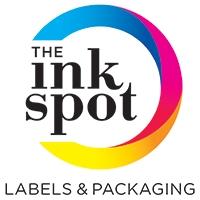 
The Ink Spot, Inc. is a Southern California label converter showing continuous, rapid growth. Its success can be attributed to perseverance, hard work, and matching the right technology within the right industry – along with its founders’ entrepreneurial spirit.

The company recently moved into a new 27,000 square foot facility in Santa Fe Springs, a suburb of Los Angeles.  The move came to accommodate a new press, and also future equipment acquisitions and capacity. What is now a thriving label manufacturing operation has come a long way from its beginnings, which was as humbling as starting a new business can be.

The Ink Spot is owned by Eric Cu and Som Reuanglith, partners who both serve as The Ink Spot’s CEOs. Best friends since high school, 13 years ago, the pair, along with a third partner, wanted to start a business together. Cu had been enjoying a successful career as a graphic artist for a union trade shop, servicing flexo printers with prepress and platemaking work. Reuanglith was an auto mechanic, with virtually no printing industry experience.

After much deliberating over what type of business to start, the entrepreneurs had an epiphany while walking through a grocery store and seeing all the packaging. With Cu’s prepress knowledge and experience, label printing sounded like a good fit, though they needed to decide on a technology to invest in.

“We had to choose between going with litho or flexo,” Cu recalls. “I knew the capital investment in litho was much larger than flexo, and with smaller margins, so that was one reason we went the flexo route. Also, I’ve always felt that flexo is an art. Litho is really more about running the equipment – there’s not much on the prepress side where you can use your creativity to print a job better on press. And with flexo, the skill of the operator running the press dictates what comes off – that’s not the case with litho.”

Cu’s experience with flexography – on the prepress side in particular – were keys to The Ink Spot getting started. He says, “Going into the business, I understood the limitations inherent within the flexo process. So I’ve taken all my knowledge of these issues and limitations that flexo printers have, and brought in my own ideas about the process, procedures and equipment needed to overcome these challenges.”

Perseverance
In 2003, The Ink Spot opened for business at a 4,500 square foot facility in El Monte, CA, with a brand new Mark Andy 2200 – an 8-color, water-based press with one UV station. Cu and Reuanglith hired an experienced flexo press operator, and the new company was off and running.

Not so fast.
To say The Ink Spot got off to a slow start would be an understatement. In fact, it wasn’t until two years later that they got their first customer.

“We didn’t have a single job,” recalls Cu. “But we brought in a pressman, and we learned how to master label printing. Those first two years were more about trialing and training. Som came into the business with his background in mechanics, so he took a hands-on approach, learning how to run the press and rewinder, how to plate mount, finishing – everything there was to know about the process. And myself, coming from the prepress side, also had a lot to learn. We did a lot of trialing, testing and trying different things.”

Looking back on those first two years, Cu and Reuanglith admit that it wasn’t easy. “People told me I was kind of crazy going into 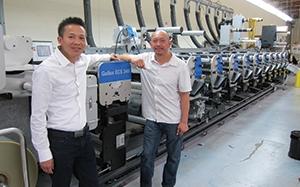 Eric Cu (L) and Som Reuanglith with their Gallus ECS 340 press.
something I had no experience in,” Reuanglith says. “We were three young guys starting a company, and there were times when the relationship between the three of us got a little rocky.”

The Ink Spot’s ownership trio soon became a duo, with the third partner cashing out and recouping the money he’d invested. But Cu and Reuanglith stuck with it. “We got on the phone and started doing cold calls, using internet search engines, trying to find any and all local manufacturers with a need for labels,” says Cu. “We went to trade shows too – anything to help better our odds.”

After two years of perseverance and persistence, The Ink Spot was rewarded with its first customer, a same-day sushi company. “It was a simple, one-color label that adheres to the tops of sushi containers, which were hand-applied,” says Cu.

The raw fish company turned out to be a pretty big fish, as far as being a label customer. “We didn’t know it at the time, because when we won the account they only showed us a couple rolls of labels, but it turned out this company has a huge sushi-making operation in Texas with over 600 employees making sushi. They were supplying all of the Whole Foods stores in the US. They required so many rolls of labels, often with just 250 or 500 labels per roll,” says Cu.

Seeing the immense business opportunity before them with this first customer, The Ink Spot invested in tooling and cylinders. Reuanglith used his mechanical skills to create a homemade core cutter to accommodate all of the roll requirements for the customer and would cut the cores himself.

This initial experience would go a long way in The Ink Spot gaining insight on how to win business. Cu explains, “With that first account of ours, when they gave us the business, they described to us the issues and problems they were having with their current label supplier – the issues that drove them to look elsewhere. He asked, ‘Can you provide us with better service? It’s not about the pricing, it’s about the service.’

“So we committed to providing that first customer, as well as every customer we’ve had since, with the highest level of service,” says Cu. “And we have not let them down. When we started with that sushi company, we were doing maybe four or five SKUs. Today, we are printing more than 300 SKUs – and their jobs always get top priority.”

The Ink Spot had momentum, and soon after the company started picking up small accounts here and there. A turning point came when they began negotiating with beverage company Naked Juice, prior to the brand being acquired by PepsiCo. After Naked Juice became part of Pepsi, they re-approached the Ink Spot and asked if they could honor the price they’d been quoted earlier. The answer was a resounding “yes.”

“When we realized how big of an order that was – hundreds of thousands of labels per month – we knew we needed to invest in a second press,” recalls Cu. “So we added another Mark Andy 2200.”

With this new business, The Ink Spot had achieved a significant milestone – they were now recognized as a PepsiCo supplier, which opened the door for more business from some of the biggest brands in the US.

“From there we just grew and grew. We’d established a reputation as providing our customers with not only top-quality labels, but also competitive pricing and the highest level of customer service,” says Cu. “Today we are a PepsiCo Master Supplier, and we also print labels for a number of major retailers: Walmart, Hasbro, Whole Foods, Trader Joe’s – you name it.”

Next level, rapid growth
As The Ink Spot grew, so too did its equipment, capabilities and facilities. Since things took off in 2005, the company has added a press every two years. They’ve also incrementally made moves into bigger facilities before finally putting down roots in Santa Fe Springs.

Cu and Reuanglith point to 2011-2012 as when things really started to take shape. The Ink Spot not only weathered the recession, but they grew throughout, even adding new machinery. And in 2013, the company did away altogether with water-based inks, opting to invest fully in UV flexo technology. 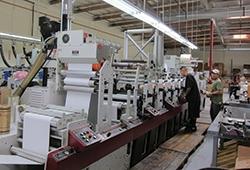 One of the company’s three Mark Andy 2200 presses
Cu explains: “The quality of print is so much better with UV, and it’s more consistent. Plus, we don’t have to break down the press every single night – we can leave the ink in the pans and just start right up the next morning. You can’t do that with water-based ink.”

The company’s most recent press acquisition, which came in December 2014, is a 10-color, 13-inch Gallus ECS 340, also known as the “Rock Press,” as it’s equipped with a base of technical granite for added stability.

Among the markets The Ink Spot serves, food and beverage dominates, while the company dabbles in other prime label end use markets, such as health and beauty. In fact, it was a health and beauty job that led The Ink Spot to invest in the Gallus press, Cu says, as the machine provided the capability to efficiently produce higher quality labels.

Food and beverage – the bottled water market in particular – are areas where The Ink Spot has found its greatest areas of growth. “Our Gallus press has been running the same bottled water job – the same SKU – nonstop since its installation,” Cu says. “The very first order we put on it – a national account – we ran 380 miles of material. The second order 180 miles. Now we’re running 220 miles on it.

It’s a clear-on-clear film label, and the Gallus has been a workhorse.”

The Ink Spot’s pressroom in Santa Fe Springs, CA
While the company has always run one-shift, Cu says with another big national account coming, it’s time to start a second. What’s also coming, he says, is another flexo press investment. While still undecided on which make and model to go with, Cu emphasizes that a new wider width press will be installed and running by the end of 2015.

Platemaking is done in-house with DuPont Cyrel platemaking systems. Recent investments have been made in shrink sleeve capability, with the addition of top-of-the-line Accraply machinery. “We’re shrink capable,” Cu says, “but we just haven’t had the line time to get it off the ground. We’d also like to do some flexible packaging. Our customers are asking for it, so it’s just a matter of time when we add another shift and new machinery to open up the capacity.”

The Ink Spot has been growing fast, while running lean. There are currently 22 employees, only one being a dedicated salesperson. With big-name customers fueling the growth, word of mouth plays a key role in winning new business.

The Ink Spot takes a service-first approach and works directly with its customers, often going above and beyond to meet specific needs. “If they need us in the middle of the night, or to open up on weekends, we’ll do that. Once we loaded up the truck at midnight, and drove to a customer in Las Vegas so they’d have their labels when they opened up in the morning,” Cu says. “We service the hell out of our customers.”

While the company is growing, it maintains a small-company feel, which it uses to its advantage. Adds Cu, “We don’t have the red tape that the large corporations have. While we have a corporate structure and operations procedures, circumstances arise where I become directly involved. I make the decision, and moments later the job goes to the production floor. It works out perfectly.”

When Reuanglith and Cu put The Ink Spot together initially, there was trepidation, as the owners knew that going into business was a serious and risky proposition that could cost them their friendship. Through all their trials and tribulations, and eventual success, the pair remains strong – still best friends and business partners.

Reuanglith says, “Eric and I have stayed together through all of our ups and downs. He’s more laid back and chilled out; me, not so much. Personality-wise, we complement each other, and so do our roles in the company. We had a lot of growing pains,” Reuanglith adds, “but we suffered through it together, persevered, and we have succeeded together.”
Related Searches