The Pursuit of Security Packaging 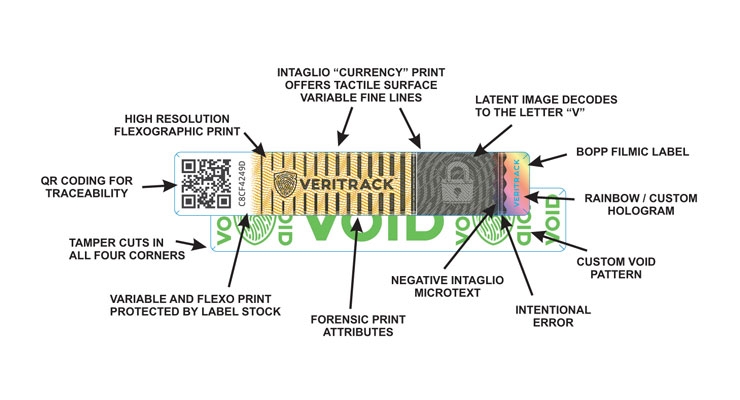 In 2015, the security printing firm Sekuworks quietly closed its doors. For a decade or so, the company had focused on providing anti-counterfeiting methods, tamper indicating labels and other brand protection devices, though its most prized offering was intaglio printing, a process undertaken today by few printers.

An announcement was made that the company’s equipment and other contents would be sold at auction. Not long thereafter, the auction notice was withdrawn, followed by another announcement: Sekuworks’ equipment had been acquired by a new company, VeriTrack Inc., which set up shop in the same Harrison, OH, USA, location.

The closing of Sekuworks threw a wrench into some legal operations across the United States. Twelve states require intaglio printing for documents, and they suddenly found themselves without a supplier and unable to properly issue certain documents such as birth, marriage and death certificates. Some of them severely restricted the number of available copies of death certificates, which confounded survivors’ abilities to settle the estates of deceased persons.

Sekuworks was the sole supplier of secure banknote paper used by counties in California to print such certificates, according to one report.

Intaglio printing utilizes images engraved in metal which transfer ink to substrates under extremely high pressure. The process allows for the printing of exceptionally fine lines and dots, and it is considered to be one of the most difficult printing processes to counterfeit. Intaglio has been in use since the 15th Century.

VeriTrack, the successor to Sekuworks, quickly stepped in to alleviate the difficulties encountered by clients both public and private. In addition to intaglio, the company provides printing and converting with flexography, rotary screen, offset and holographic processes. It produces labels, tapes, seals and documents designed to verify authenticity and provide anti-counterfeiting counter measures. Also offered is a QR track and trace software system to protect against product diversions, gray market activities and other supply chain concerns.

Robert Sherwood is VeriTrack’s vice president for security programs management. He has a distinct knowledge advantage in this field by virtue of the fact that he was with Sekuworks from its early days, concentrating on sales, marketing and industry relations.

The most secure labels and packaging combine a variety of security applications, Sherwood says. The simple use of a hologram for identity is no longer enough. “As holograms have become more marketing devices than security, given the copying that occurs in some countries, it is difficult for a consumer to tell whether a hologram is real or not.” As a result, VeriTrack is using intaglio printing for labels using color shifting inks, which are readily available these days. The labels can have a rainbow or holographic background.

“Another security aspect that we combine is proprietary tamper indicating, usually a pattern with overprint,” Sherwood says. “We print our own void patterns with tapes and labels. A bad guy can’t go out and buy stock material; what we make doesn’t look generic. They feature the company’s name and logo, which add elements of differentiation. We are certainly printing with invisible inks, and we use high resolution flexo plating for microtext.”

Counterfeiting at retail is a major operation, and to battle it requires investment in packaging and feet on the ground by the concerned producers. How does that work?

“Basically,” says Sherwood, “there are three levels of authentication. The first level involves the consumer: They need to see something on the package that gives them the confidence that it is genuine, and has not been opened.

“Second, investigators have to go out in the field to examine products on the shelves. In some cases, as with upshifting phosphors, they will use readers or label pens to confirm authenticity, or similar instruments. They often buy something. Sometimes counterfeit products are mingled with the good stuff, and the investigator makes a first quick evaluation of a product without readers. If he’s suspicious he can buy it.

“Third is the forensic level. You have to make use of technology that will hold up in a court of law. When the counterfeiters try to copy intaglio they usually print offset, and try to fake it with thermochromic or other inks. The latent image is always visible in something other than intaglio.”

Not everyone, however, shops for their retail goods in stores these days. “In the brand protection world, with the rise of the internet, there are a lot of companies that are now finding their products elsewhere online, so a lot of resources are spent chasing down and shutting down rogue websites,” Sherwood notes. “A lot of money is being spent on lawyers, and a great deal of focus is on that, instead of overt protection.

“Still, the ability to make a label do more than one function is something people are very interested in. We employ QR codes or other codes, proprietary ones, for track and trace. And we can put various technologies in one label.

“For example, we worked with a company that manufactures a nutritional supplement. The label was intaglio-printed for anti-counterfeit purposes, plus a void-indicating label from the cap down the side of bottle. On the lower portion it had a QR code with a randomized unique number on it, so that when scanned with a phone, it would go to a database and confirm that it was a valid number.”

A lot of discussion is taking place about QR codes lately, Sherwood says. In Asia they are used all the time, but not nearly as much in the Western world. “The rates of use are probably what direct mail is; if you get a few percent response, that’s good. It used to be that you didn’t want to have a proprietary app to read the code on your product. Now it downloads a company’s app.”

Holograms and security inks are still employed in security labeling as much as they have been in the past. “But it’s very easy to simulate a real hologram,” adds Sherwood. “You can get one for $500 from China. It’s easy to fool someone who doesn’t know what it’s supposed to look like. From a forensic standpoint they are still great, still nearly impossible to counterfeit; the bad guys don’t spend time doing that.

“But if someone wants to easily verify an authentic product, intaglio is the only process that is left. Governments are watching who has intaglio, because all the money is made that way. The bad guys aren’t going to take their time to apply it to brand protection.”

VeriTrack has a long list of security methods and techniques that can be used in its products. These include taggants, security threads, latent images, microlines and microtext, nano markers, integrated foils, high definition bar coding, custom tamper evident void patterns and hidden imaging.

The author is president of Jack Kenny Media, a communications firm specializing in the packaging industry, and is the former editor of L&NW magazine. He can be reached by email at jackjkenny@gmail.com.
Related Searches