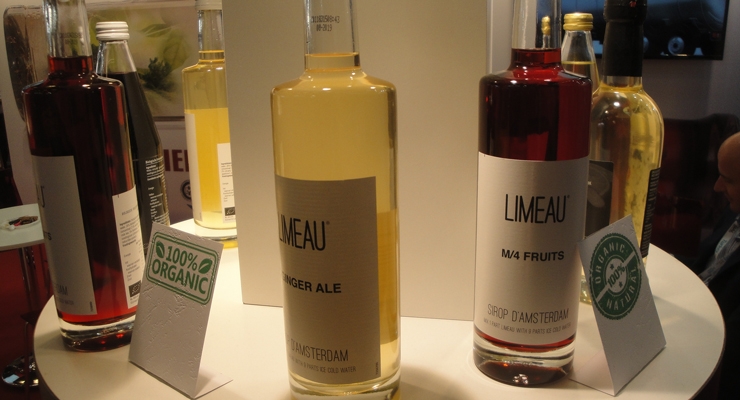 Simple label designs were a packaging theme at SIAL Paris. 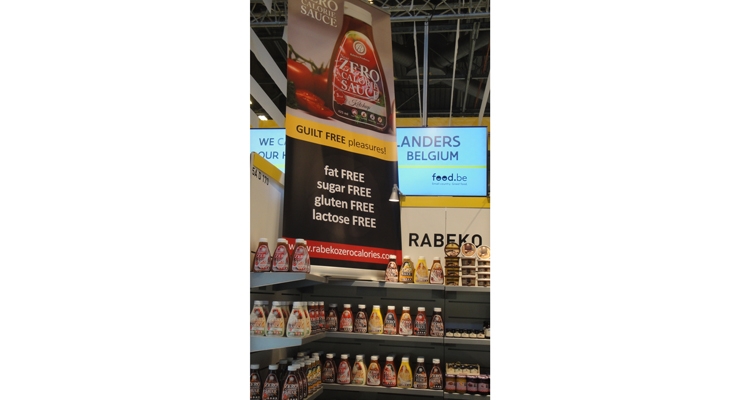 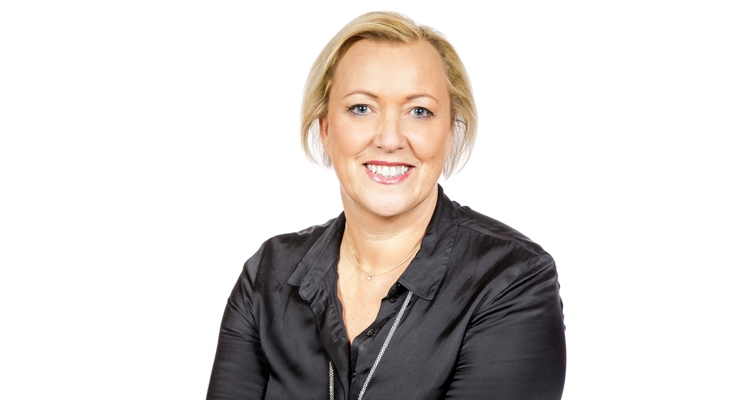 It is well known that in Germany they like their beer to be pure and free from all harmful ingredients (apart from alcohol). It is maybe less well known internationally that a lot of German beer comes in returnable glass bottles. This means the beer labels must be wash-off, and the inks and adhesives must be as pure and environmentally friendly as the beer. Carlsberg, though based in Denmark, is one of Germany’s best known beers and has a program called “Together Towards ZERO,” which aims to make its products more sustainable and to ensure that consumers live more healthy and sustainable lives, though presumably not to the extent of giving up beer. At a press conference in September of this year, Carlsberg announced a series of innovations developed in partnership with hubergroup, one of Germany’s leading ink manufacturers. Huber takes seriously its commitment to roll out better and more environmentally friendly inks. According to Carlsberg brand director Julian Marsili, “Printing inks have major impacts on the recyclability of packaging because they are often recycled along with paper fibers. To improve the recyclability of Carlsberg labels in selected markets, we are using hubergroup’s Eco-Offset Ink Premium Plus.” This initiative got fulsome praise at the Healthy Printing Symposium, held in Lüneburg, Germany earlier this year in September.

…and greener labelstock
It’s not just inks that upset ecologists. Labelstock producers also are often made painfully aware that their product is potentially bad news for the environment. UPM Raflatac styles itself as “the Biofore company” and is active in promoting in particular the collection and reprocessing of used liner. Avery Dennison (see sidebar on page 35) is looking, in particular, at ways of recycling synthetic liners.

Not to be outdone, Herma is increasing the use of recycled papers in its face materials and is re-using liner waste from its production plants. According to Herma CEO Thomas Baumgärtner, the company collected and recycled some 217 tons of discarded release liner in 2017. “With the assistance of the Cycle For Green (C4G) consultancy and Austrian paper manufacturer Lenzing, this is turned into label paper or release liner, both of which we are reusing. By participating in this recycling program, we not only make an important contribution to preserving the environment, we also partly offset current resource shortages. Due to very high demand in Asia, especially China, and continuing growth in Europe, we are facing shortages of paper,” explains Baumgärtner. The German Association of Self-Adhesive Label Converters VskE has confirmed this development, pointing out the consequences: “All major cellulose producers worldwide have raised their prices, some of them even several times,” says VskE’s Klemens Ehrlitzer. “There have been price hikes of up to 8% just over the last six months of 2017, with further increases this year.”  These price increases, according to the German association, have hit thermal direct papers particularly, as their production requires certain leuko-pigments mainly manufactured by just four Chinese factories, two of which were recently closed down by the authorities. However, before readers get out their handkerchiefs, it should be noted that consumer demand in Germany is doing very nicely thank you, with online shopping growing in double digits, and overall PS label consumption running at several percentage points above Germany’s GDP.

Nobody loves a lobbyist
If anyone thought lobbying was a Washington specialty, they need to come over to Brussels, where the European Commission and Parliament are besieged by lobbyists of every shape and flavor. One active lobbying voice is that of PS label association FINAT. Another is the Association of European PET Film Manufacturers, which is fighting a proposal before the Parliament to reduce Europe’s consumption of PET. A bad idea, says the PET lobby (predictably), arguing for better collecting and recycling.

Voluntary commitments have been made by, among others, Petcore Europe, EuPC and Plastics Recyclers Europe, and the entire industry reportedly is committed to increasing its role in the Circular Economy. The lobby group has gone so far as to make a commitment to the European Commission – by 2025 the average recycled content of its products will be raised to 70%. Only a cynic (such as your correspondent) could suggest that by 2025 the commitment might have been forgotten.

Labels from stone
Some months ago, this column reported on a new packaging paper made from hay. Now a German converter is producing labels with a face material made from crushed marble. More precisely, the paper consists of 80% marble waste and 20% recycled PE.  Schiller Etiketten, who pioneered the material, claims that these stone paper labels offer users various advantages over paper labels or PE film. Moisture-resistant, they are suitable for shampoos or shower gels. Used as a face material, stone-paper is said to be significantly more tear-resistant than paper or board. It can be written on or printed even when wet and is reported to have a velvet matte surface and to be naturally white without the use of any chemicals.

Greenery and Nature at SIAL
With more than 7,000 exhibitors, the international food show SIAL Paris 2018, held October 21-25, was once again the talk of the town for the 160,000 or so professional visitors. At the main entrance to the show, the “SIAL Innovation” area brought together novelties from around the world. A very strong trend this year was the preponderance of organic products, gluten-free, salt-free, sugar-free and (in some cases) taste-free into the bargain. Hundreds of exhibitors were riding the wave of natural or “green” products. Paradoxically, it seems that plastic packaging is gaining ground. The other packaging solution that seems to be gaining ground is the pouch. For labels, some products were displaying an ultra-simple or even monochrome design. The Asian countries were well represented among the exhibitors, with more than 500 Chinese producers. The 850 French exhibitors, playing on home turf, all seemed to attract good crowds, and in the aisles one heard more French and Italian than English spoken. This is no doubt partly due to the British who, Brexit oblige, occupied only 150 stands, beaten even by the Americans who fielded more than 200.

Label & Narrow Web: You have just been named global director of Avery Dennison’s R&D function. What do you see as the main challenges in your new responsibilities?

Pascale Wautelet: It’s been a little over a year since I joined Avery Dennison, but it’s only since early July of this year that I became global VP R&D for the Labels & Graphic Materials Group. This is not an entirely new field for me, as I have worked a good part of my career in chemistry and petrochemistry, and very much focused on films for packaging and labels.

L&NW: Do you ever get a little nervous?

PW: My responsibilities today are wider than in the past, but I love dealing with new challenges. I’ve worked in production and sales, but now I’m coming back to the source because I’m a chemist by training. And I see a lot of changes, whether in ecology, or in the global geopolitical situation. To put it simply, I see two major trends that affect our industry. Firstly digitization. It is all around us today, and that’s nothing compared to what will come. For me as a scientist, it’s very important. The other mega-trend, of course, is sustainable development. There are more and more interest groups in the world positioning themselves around environmental issues, with various and varied objectives. And then in Europe we risk seeing more European Union directives regulating different aspects of packaging, especially in regards to recycling of plastic films. When you are in R & D, you have to be very fast on your feet to meet the expectations of consumers, NGOs and public authorities. The circular economy is at the center of our thinking. For us as Avery Dennison, this means first and foremost to reduce our consumption of raw materials - water, energy, etc. - and reduce or recycle waste from our production sites. We are also developing rPET liners, made from recycled PET, for example, and we have introduced several programs to encourage recycling of liners by facilitating contact with recyclers in their area, and making sure that all players in the industry, including companies that collect and sort waste, work together.

L&NW: You are talking about plastic waste, which is certainly a big problem, but as you know 60-70% of liners are glassine, for which the recycling rate is rather low.

PW: The same collection programs exist for glassines. If I talk about plastics, it’s because glassine recycling has been in place for a number of years, and I do not see any major need for new approaches. For us, the priority is plastic. Consumers and public authorities need to be more aware of the importance of sorting and recycling. For us, as Avery Dennison, it is important to closely monitor changing label and packaging markets so as to help people make the right decisions that will drive the circular economy.

L&NW: Before joining Avery Dennison you were in an Indian-owned family business. How were you able to adapt to the corporate environment of a large American company?

PW: Before Jindal, I spent a good part of my career in a major oil company, so for me it’s more like a homecoming.

L&NW: And to move to the Netherlands?

PW: I spent a lot of my childhood in Brazil, and I studied in France and Belgium. I lived in the United States for three years and of course I traveled a lot – and with my new responsibilities, I won’t be traveling any less! Even here at the Avery Dennison European headquarters we are about 20 different nationalities in the R&D department, and worldwide Avery Dennison has more than 300 scientists. 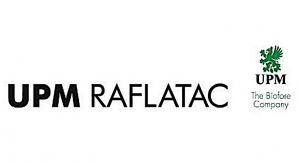 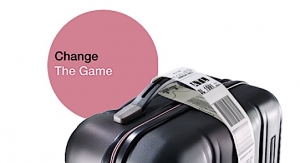 Avery Dennison looks to 'Change the Game' at Labelexpo Americas 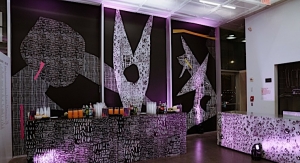 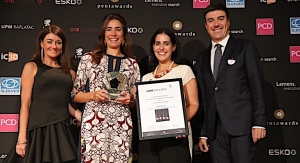 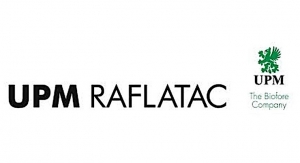 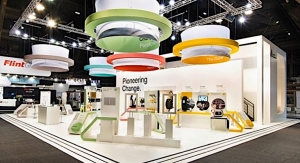 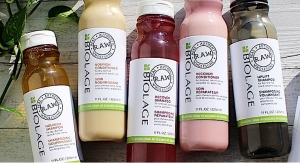 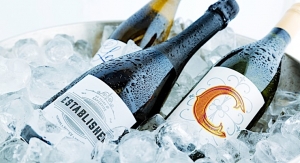 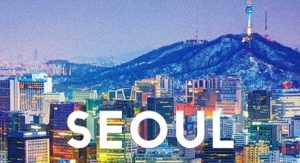