Too big to fail – will European governments step in to help COVID-stricken giants? 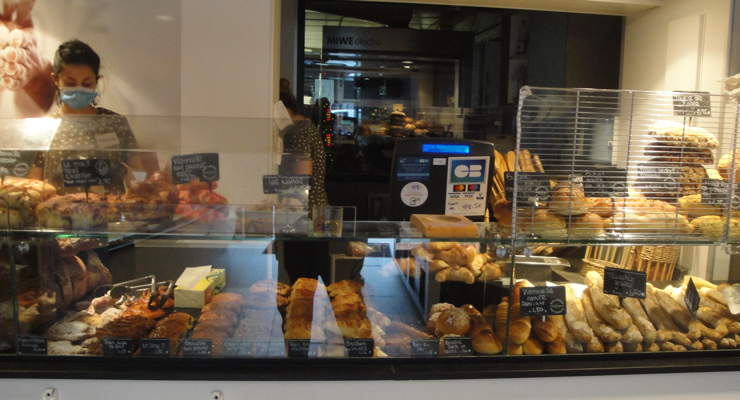 Essential employees are ensuring the public receives their products. 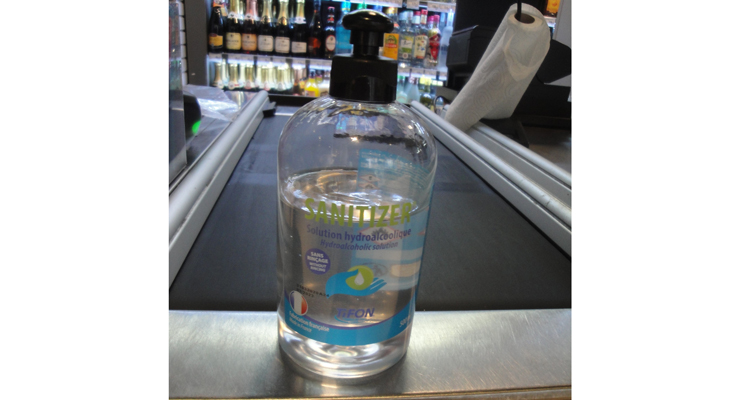 Converters across the globe are seeing an increase in demand for sanitizer labels.

The German business magazine Handelsblatt has no time for sensationalism. It was all the more surprising to read its recent analysis of Heidelberg, the German print machinery maker often described as “too big to fail.” The recent departure of director Ulrich Herman, following closely on that of CFO Dirk Kaliebe, shows “the self-inflicted destruction of a world leader,” according to Handelsblatt, which goes on to suggest a power struggle at the top of Heidelberg, a need for more bank loans, and the possibility that the Chinese company Masterwork might soon increase its 8.5% holding in the German giant.

Heidelberg has struck back, calling the Handelsblatt article “stuffed full of inexactitudes and non-truths.”  While this ungentlemanly name-calling is going on, Heidelberg has stopped production of some of its format presses, including its inkjet Primefire line, launched in 2016, and several of its sheet offset Speedmasters. This is “in order to concentrate on its profitable core business.”

Heidelberg is not the only European press manufacturer to feel the cold wind of COVID-19. Bobst has put its plants in Switzerland, France and India on “minimum production levels,” in order to continue supplying customers while strictly adhering to COVID-related safety restrictions. Its plant in China was scheduled to reopen normally in mid-April. Bobst, which has worldwide sales of $1.7 billion, has announced that it has “taken measures to secure the necessary liquidity to continue the group’s operations.”

Over the Alps in Italy, press manufacturer Durst announced that early in April, “We were able to restart partial production of our label and packaging equipment division.” Durst is also using spare capacity to produce masks, “personalized with logos, texts and graphics” – a worthwhile initiative but not enough, alone to keep the wolf from the door. Hence no doubt Durst’s innovative partnership with fellow-Italian Omet. Leaving aside the hyperbole, the recently-launched Omet XJet press is the result of the combination between Omet flexo quality and Durst digital inkjet printing technology, plus exclusive finishing and converting units to obtain the final product in one single pass.

“This partnership has made possible the perfect hybrid solution able to provide the maximum level of productivity, independent of run length,” says Omet’s Massimo Bellingardi.
Just for the record, Omet’s plants are in Lecco, just a 20-minute drive into the Alps from Bergamo, one of the towns worst hit by the virus, but Lecco is mercifully free from infection. Maybe it’s the mountain air. Or the UV.

Fake news
If you saw the headline, “World’s biggest print trade show to go ahead this year,” wouldn’t you rub your eyes in disbelief? Well, it’s true of course. Barring accidents and incidents, All In Print China in October 2020 in Shanghai will be the world’s number one print show.

Messe Dusseldorf (which outside North America is probably the world’s biggest trade show organizer) will also be running print shows in Manila and Jakarta in the fall of this year. In fact, if Europe escapes the feared “second wave” of coronavirus, trade shows should be getting back to normal by the end of this year. The organizers of the Paris All4Pack show certainly hope so. The show is scheduled November 23-26.

Alliance Etiquettes number one in France?
Powered by the Paris-based private equity group Activa Capital, Alliance Etiquettes has grown rapidly by acquisition since its founding in 2015. Its latest takeover in March of this year was 5/7 Etiquettes, a company formerly headed by Patrick Wack. Under Wack’s leadership, 5/7 was a pioneer in seeing the label business as a service, not a mechanical process.

Alliance Etiquettes’ CEO Olivier Laulan reckons the group, with its sales just short of $60 million, is now number one in France.

The COVID-19 pandemic has dulled the acquisitions business, but could also provide opportunities, as undercapitalized French label converters – and there are plenty – feel the cold blast of recession later this year.

An ill wind
Talking of winds, there is an old saying, “It’s an ill wind that blows nobody any good.” The COVID-19 pandemic has seen pizza-delivery companies and soap-makers laughing all the way to the bank. The same good fortune has shone upon certain label converters.

Jules Lejeune, FINAT managing director, is upbeat: “Several countries have explicitly or implicitly declared labels and packaging an essential part of the critical infrastructure for the food and medical supply chain. We also welcome the EU Commission’s new ‘Guidelines for Border Management,’ implementing Green Lanes for essential freight transport. We, however, look forward to even more concerted measures on a European level to contain the economic impact of this crisis. In Europe, governments, industries and workers alike, we are all in this together.”

Not all EU and national government initiatives have been so helpful. Generous benefits for laid-off workers added to draconian safety measures at the workplace have inevitably been exploited by a minority of employees. According to one label equipment maker, “A third of our staff turned up regularly for duty, a third worked from home, and a third, well, probably included some malingerers.”

This did not stop European labelstock demand from surging 6.8% in the first quarter of 2020 compared with the previous year. Despite being early victims of the pandemic, Italy and Spain grew by over 5%, and Eastern Europe by double that amount.

Nobody is laying bets on Europe’s labelstock demand in the second quarter of this year and beyond, but there are signs of optimism. Labelstock producer Herma announced in a recent communiqué that the partial commissioning of its new plant will help to absorb production peaks. “Much of the current order stream is being fueled by the increased demand for adhesive materials that are applied to shipping labels or product labels for medicines, disinfectants and other medical products,” says a Herma spokesperson.

Both good and bad news is coming in from Italy’s Fedrigoni Group. As of the end of April, eight of its nine paper mills in Italy had stopped production. But CEO Marco Nespolo makes a distinction: “This crisis has a different impact on our group’s labelstock division. The demand for pressure sensitive labels has meant an increase in production.”

French label demand is certainly benefiting from the pharmaceutical market (although prescription drug volumes are down as patients avoid setting foot in hospitals of doctors’ surgeries), but the big good news, particularly in France, comes from food labels. As Europeans in most countries found their cafés and restaurants closed, they turned to the supermarkets. One French label converter reported customers practically lining up to get their orders delivered fast.

The same does not seem to be true of alcoholic beverages. In France at least, brewers are pouring the stuff down the drain for lack of storage space. France exports half its total wine production, and since the lockdown, exports have shrunk to unprecedented lows, not helped by the punitive tariffs imposed by the United States. And as for champagne, well, people don’t see much to celebrate at the moment, with marriages, baptisms and every convivial event being postponed to a later date. Label converters like Billet, in the heart of the champagne country, are hard hit and possibly wishing they had postponed the installation in February of that 8-color Gallus RCS430 press.

Geostick, based in the Netherlands, can comfortably ignore the champagne label business but not the flower sector. The international flower sector is big business, and in normal circumstances there is a continuous stream of cargo planes converging on Amsterdam with out-of-season flowers, which then get distributed to florists throughout Europe. A pioneer in digital label production, Geostick specializes in short-run, super-fast deliveries to this huge wholesale flower market.

Geostick’s owner and CEO is Peter Berveling, who has built up the company to be one of the leaders in Benelux. When Coca-Cola wanted every can to be different, they turned to Geostick (and others) for digital printing expertise. Shortly before the COVID-19 lockdown, Geostick took delivery of no less than five Digicon finishing lines from UK’s AB Graphic. ABG is no newcomer to Geostick’s development, having already supplied 35 finishing lines.

The town of Angers in Western France is best known for its impressive medieval castle, built by the Plantagenet kings of England to hold off the assaults of the kings of France. Angers is also the home of Lefrancq Packaging, which braved the lockdown to install a Gallus Labelmaster press. Lefrancq is also engaged in renovating and extending its workshop. Its main business is leaflets for medicines (those closely folded papers that nobody reads), but CEO Eric Lefrancq sees PS labels as a logical extension of his business.

Flowers and Plantagenets are a long way off for Erdal Printing & Label. This converter, based in Izmir on Turkey’s west coast, specializes in highly-resistant labels and signage: Erdal’s signage products can be seen on Turkey’s helicopters and fighter planes, as well as on cars, trains and white goods.

The company has just installed a Screen Truepress Jet L350UV+ inkjet press. Kaan Özhelvacı, Erdal’s marketing director, reports excellent results for chemical and weather-resistance of labels printed on the new press. Erdal also supplies signage to cafés and bars throughout Turkey. So next time you’re down that way and feeling thirsty, remember the nearest watering hole may be kitted out with signage from Erdal.