The new facility was completed in advance of the 50-year anniversary of the original UEI company, Universal Lustre Leaf. 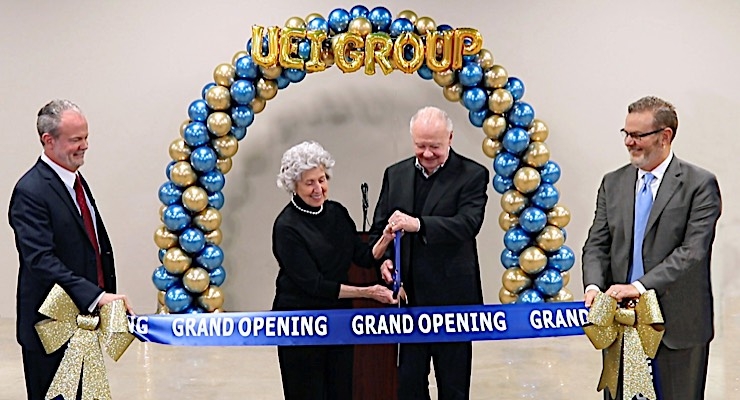 The UEI Group recently unveiled its new world headquarters, located at 9000 Nieman Road, Overland Park, KS, USA. To commemorate, the UEI Group held an opening ceremony for its employees and local officials, which concluded with a ribbon-cutting by Glenn and Sue Hutchison, the Chairman of the Board and his wife.

UEI Group companies were founded with one company by Glenn Hutchison in 1971. Since then, the UEI family of companies has grown from a single company and a few employees to multiple companies in various locations.

With the continued growth and expansion of the UEI Group companies (Universal Engraving, Inc., UEI Systems, UEI Falcontec and Infinity Foils, Inc.), it became important to have a separate UEI Group facility dedicated to the advancement and betterment of all UEI Group companies. Under the guidance of an executive team, the new UEI Group headquarters staff can better coordinate the global needs of all UEI businesses, their market developers and customers. The new facility also contains a research and development program focused on developing new products and processes for the foil stamping and embossing industries.

Heading the executive team is Larry Hutchison, president and CEO of Universal Engraving. “Helping each UEI Group company to better meet customer expectations, product needs and experiences is paramount with the Hutchison family, and it’s an integral part of the core foundation that built each UEI Group company," says Larry. “We are thrilled with our new UEI Group world headquarters and the symbolism for which it stands and unites a unique group of companies for the betterment of the industries that they serve. You couldn’t ask for a better committed supplier than a UEI Group company."