With its Contiweb connection and in-house skills, DG press is looking forward to the next decade of business. 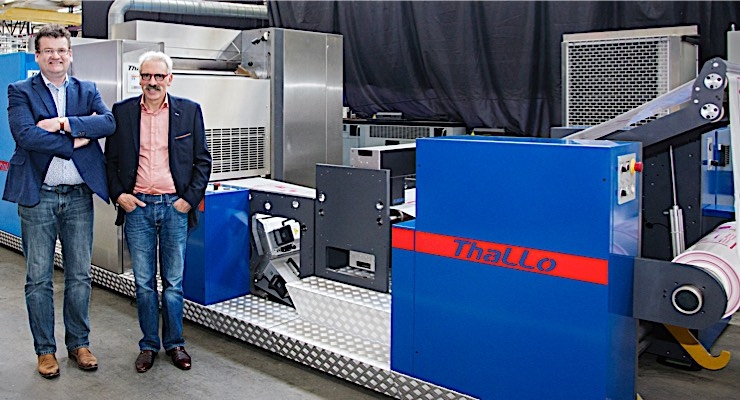 DG press, which was founded by Remko Koolbergen and Peter Kloppers, has celebrated its 10th year in business. The company is set to go from strength to strength in the market for flexible packaging and label printing with its variable sleeve web offset technology. Resurrected by Drent Goebel, from which it acquired the IP, DG press, which was initially co-funded by customers, set about supplying service and parts support to the many Drent Goebel machines in daily operation worldwide.

Koolbergen explains, “We knew there was an existing and ongoing demand from printing companies who relied on Drent Goebel presses to earn their living, so we were confident from day one that we could build a successful business.”

As early as 2010, the new company had sold its first used Vision press, as well as its first fully refurbished model, and purchased the full stock of Vision parts from the now defunct Müller Martini print division.

Over the ensuing years, DG press introduced the Vision SP, exhibited at drupa 2012, and decided to develop the next generation of variable sleeve offset presses for flexible packaging. In the beginning of 2013, it moved into the old Drent Goebel building in Hall, which had fallen into disrepair and was in need of a large investment to restore it to a modern production facility.

The company developed its new press technology, Thallo, and the first prototype hit the floor in 2014, less than 12 months after the project was conceived, and around the same time as the first new 10-color Vision was sold.  ollowing a successful open house at the company’s HQ, two Thallo presses were sold and a third was installed for demonstration purposes in Hall.

One of the Thallo lines was purchased by Vuye Flexible Packaging in Belgium, for whom managing director, Lieven Vuye comments, “As an existing user of VSOP technology, I had the utmost confidence in the ability of DG press to deliver the next generation machine as a highly competitive production tool.  They used their unique expertise gained through ongoing service support to combine the best of the older press with significant improvement in key areas on the Thallo.”

These sentiments were echoed by Ingo Pauw, technical director at NovaPrint in Oldenburg, Germany, which has two of the earlier VSOP presses: “We believe this technology gives us an edge over our competition, but like all machines, they are only as good as the support they receive from the manufacturer – and in that regard I cannot praise DG press too highly for their commitment and response," Pauw notes. "By working closely together as a team, both parties reap the benefits."

But the financial strain of being self-funding finally told in 2016, and the two founding directors decided that to protect the company and guarantee the future of its employees and technological development, an injection of outside resources was needed, and the IP was sold to Contiweb. In 2017 and 2018, six more Thallo presses were built and delivered, as well as two Vision lines, and the company has since taken a decision to focus on "special" machines, where its in-depth knowledge and expertise offers a real USP.

Sadly, in 2017, Peter Kloppers’ health deteriorated resulting in him taking early retirement, and his shares passing to Remko Koolbergen. The 10th anniversary therefore became a poignant occasion for the two partners who, according to Koolbergen, were a perfect foil for each other: “Peter was good at opening doors – I was good at keeping them open,”  he says.

With its Contiweb connection and in-house skills, DG press is looking forward to the next decade of business.
Related Searches