The Microfont Color Laser film can be read only under a microscope at 40-fold magnification. 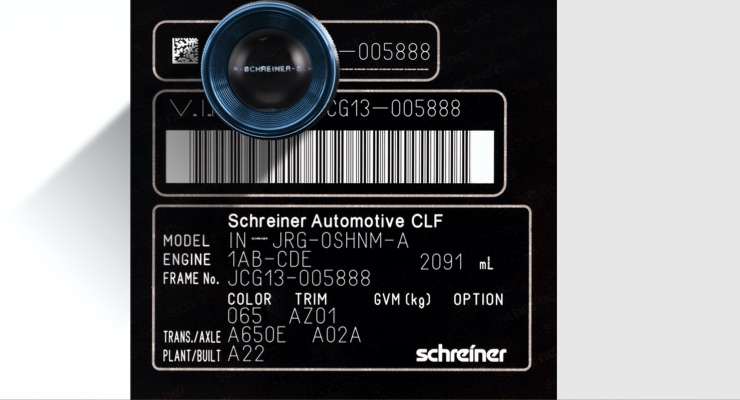 Schreiner ProTech has introduced an anti-counterfeiting product featuring the application of a customized microfont on color laser film (CLF) nameplates. Unlike many anti-counterfeiting products, the microfont system incurs no additional costs because all required infrastructure – namely, the film and the laser equipment – is already available on customers‘ standard laser printing line operations.

Nearly indiscernible with the naked eye, the microfont can be read only under a microscope at 40-fold magnification. Its exceedingly tiny size is made possible by an extremely thin (less than 1 micron) laser-sensitive film layer. By comparison, conventional laser films have a layer thickness of 50 microns. This minimized coating thickness makes it possible to maximize font resolution, resulting in enhanced microscopic delicacy.

“One in 10 companies in Germany has been the victim of product and brand piracy at least once in the past five years,” says IW expert Oliver Koppel.

Unfortunately, product protection solutions often involve additional costs and are at risk of being faked themselves. Schreiner ProTech’s microfont solution accounts for both of these issues by employing a combination of existing infrastructure and difficulty of duplication. Even if the microfont is detected – itself an unlikelihood with the unaided eye – counterfeiters would be hard-pressed to copy it because they lack a key components of the variable marking system: Color Laser Film, which is not freely accessible.