The digital printing specialist has created a tribute video for Tom Staib, who was a pillar in the label and package printing industry. 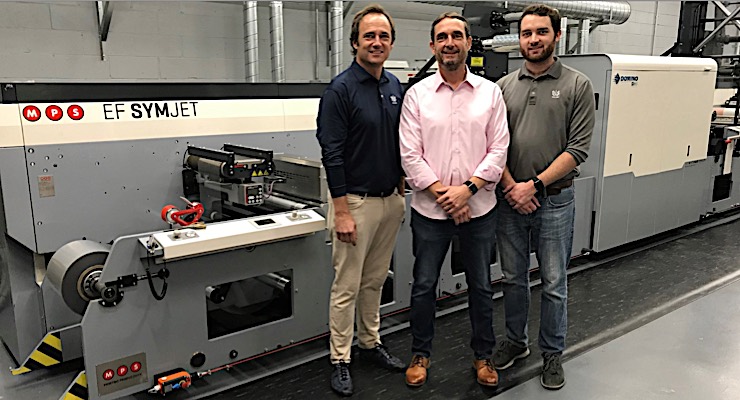 Domino has created a tribute video to Tom Staib, who passed away suddenly October 2, 2020. Tom was fourth-generation owner with his brother, Andy, of DWS Printing, a label manufacturer located on Long Island in Deer Park, NY, USA, which has been in business since 1865.

“Tom was our customer, our business partner, our friend,” say Bill Myers, marketing manager at Domino. "He was well known and highly regarded. You could find him often at industry events presenting to and networking with other label manufacturers, sharing information and best practices. Tom was extremely passionate about his family and his employees. He was very proud of DWS Printing’s 150-plus year heritage, its exciting future and utilizing technology to be a leader in the industry.”

DWS Printing’s main focus is the food and beverage sectors, with a strong presence in the craft beer market. And the Staibs saw an opportunity. The craft beer market is heavily into shrink sleeve labels on beer cans and a lot of their business was trending that way.  The Staibs wanted to have the option to print shrink sleeves digitally, and by adding digital printing to their arsenal, this would also allow for quick and efficient production of label jobs requiring several SKUs and versioning.

Through much research and a very thorough due diligence process, DWS Printing’s journey to digital was celebrated with the purchase of the MPS EF Symjet "powered by Domino" hybrid press at Labelexpo Europe 2017 and installed in January 2018. In-house application of the shrink sleeves onto cans complements the operation, with the packaging division being managed by Tom’s son, TJ, fifth generation at DWS Printing.

With much success, DWS next set its sights on expansion. A new facility in Austin, TX in Fall 2020 was underway, led by the investment in a second MPS-Domino hybrid press for that location.

“I received a text message from Tom last September 2020, which included a photo of the Domino press that had just arrived at the Austin facility," says Myers. "He wrote 'It’s getting exciting, Bill.' We were in the process of creating a wonderful video for DWS Printing that included footage of Tom, Andy and the DWS team at the Long Island facility. And with the expansion into Texas, we set up time lapse cameras in Austin to show the second MPS-Domino hybrid press being installed.Tom and Andy were thrilled. And then in early October I received the news about Tom. I communicated my sincerest condolences to Andy, and I contacted the production company to stop the video project.”

The entire industry was shocked and saddened with the loss of Tom. He was an incredibly kind, humble, and all-around great person.

“In February 2021, I saw a post on LinkedIn by Andy that read, ‘Carrying the DWS torch in Austin, Texas’ with a photo of him and several DWS Printing team members at the new facility," adds Myers. "Painted on the wall above them in large letters it read #TomStrong. I thought that was awesome. It made me smile, and it gave me the idea to create a video as a tribute to Tom…honoring his legacy and the DWS family, with a glimpse towards the exciting future of the company. I do believe that someday we will revisit finishing the original video we started, but for now, this one just feels right.”

A tribute video was created and sent to Andy, with the hopes that he would be okay with Domino sharing the video with the label and packaging industry, because so many people in the business knew and loved Tom.

“Andy wrote back a very personal note which I will treasure," says Myers, "and he concluded with these words: 'Please share the tribute video whenever you’d like and with whoever you wish. I couldn’t be more proud of DWS’ partnership with Domino."

Learn more about DWS Printing with this in-depth feature.

View the video below: