With an increase in its grocery business due to COVID-19, the converter reached nearly 82 million impressions on its Heidelberg press. 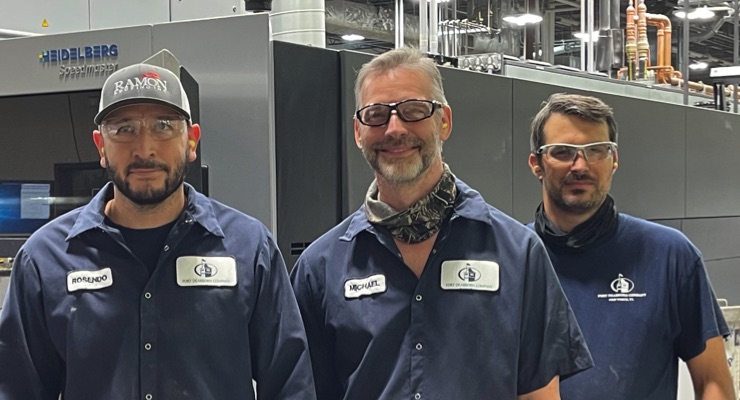 With a significant increase in its business due to COVID-19’s demand on grocery stores, Fort Dearborn, a custom label and packaging company with twenty locations nationwide, reached nearly 82 million impressions on its Heidelberg Speedmaster XL 106-8+L in 2020. The press, located at the company’s Fort Worth plant, achieved the highest gross impressions of any XL 106 in the world last year.

Printing primarily cut and stack labels, the Fort Worth location of Fort Dearborn is equipped with two Speedmaster XL 105s and one other XL 106 in addition to its world-record press, which was installed in July of 2019. In comparison to similar machines in the market, the XL 106 at Fort Dearborn produced more than 2.5x the number of annual gross impressions than the industry average of 32 million. Fort Dearborn credits its record-breaking performance to the overwhelmingly advanced technology of the press, its increased business in 2020, and its overall plant strategy and teamwork mentality.

“When we installed our newest XL 106, it almost doubled the horsepower of the older press we replaced. Without it, we would have never been able to keep up with the increased demand in our business during 2020,” says Bob Zeisler, General Manager of the Fort Worth plant. In addition to the increased speeds of the press, which runs 24/7 at 18,000 sheets per hour, the XL 106 is equipped with advanced, efficiency boosting technology like CutStar, Heidelberg’s inline roll-to-sheet device, and Inpress Control, the industry-leading inline spectrophotometer that measures and controls color and register on the fly at any speed. Inpress Control enables swift changeovers between label jobs, and according to Zeisler, “No other manufacturer comes close to the accuracy and speed of Inpress Control. It’s an absolute gamechanger in our business.”

Thanks to the enhanced throughput and efficiency of the press, Fort Dearborn was able to meet the very demanding lead times that COVID brought upon the label and packaging sector in 2020 and in turn, organically capture new business from its existing customer base. Zeisler cites this ability to meet short turnaround times as the main competitive advantage the plant has over some of its competitors and “without this press and our other Heidelberg presses, we would never be able to meet this challenge.”

Purposeful Lean Strategy & Pit Crew Mentality
While the technology of the press played a large role in the success of the Fort Worth plant last year, its achievements would not have been possible without the company’s overall strategy and teamwork mentality at work. When it installed its second XL 106 in 2019, less than a year after its first XL 106, Fort Dearborn developed a strategic vision for how it would allocate jobs between the two machines: shorter run, UV labels would be printed on the older press, while the plant’s long run jobs would be printed exclusively on the newer press.

“This strategy really increased the total output of the entire facility,” says Zeisler. “To be successful with it, it’s an entire team effort that starts with the scheduler. Without this plan in place, I’m not sure we would have been able to hold up to pressure of last year, let alone achieve this record accomplishment.”

In addition to achieving nearly 82 million impressions last year, Fort Dearborn reached an Overall Equipment Effectiveness (OEE) of 53.85 % on its XL 106 -- compared to the industry average of 25%. Zeisler credits this above-average efficiency to the “pit crew” mentality that his operators have for make ready and for producing jobs on the machine. “We’re a very speed and output driven plant. We’re tracking each machine on hour-by-hour charts and looking for every downtime, speed, and quality issue to apply countermeasures that eliminate or reduce the root causes. We have very exceptional, experienced crews that are constantly pushing to get materials through the machines,” adds Zeisler.

Fort Dearborn also credits the Heidelberg team for helping make its own team successful. In addition to the “best in class” training its operators received on both of its XL 106s, Fort Dearborn also had monthly tracking calls with Heidelberg Performance Advisors during the first twelve months after installation. The Advisors were able to address any of Fort Dearborn’s issues, fill in knowledge gaps, and ensure it was getting the results that it needed to be successful. “All of the stars just aligned last year,” says Zeisler, adding, "And I can’t thank my team or the Heidelberg team enough for achieving this outstanding accomplishment – especially in the midst of the stress and pressure that the pandemic has brought on.”