“We are seeing a digital trend that’s really high in the microbrew space, both in shrink sleeves and pressure sensitive,” says Bruce Hanson. 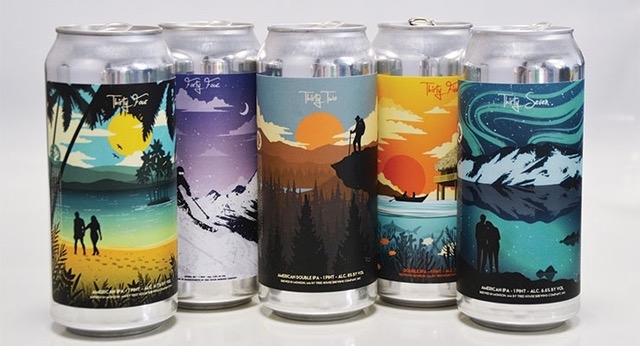 Pressure sensitive labels have allowed the growing craft beer market to really spread its wings in recent years. Brands have the opportunity to utilize a greater chunk of real estate to spread their message, whether it be on a can, bottle or growler. The labels must also be functional, withstanding the demands of moisture in an ice bucket.

Craft beer companies have capitalized on a host of trends that allow them to compete with the biggest players in the market. “Microbrews connect with their audiences through packaging,” says Alan Etheridge, director of customer engagement at RR Donnelley. “Traditionally, the larger brewers connected with consumers through different forms of advertising and marketing. Everything at the microbrew level is around the packaging and connecting with the consumer at the package level.”

The craft beer label will often target varying generations, regions, states and even towns to attract consumers. Creative art, embellishments, and target messages are frequently used to deliver those messages. And quite often, a consumer will buy a craft beer solely because of the label.

“Now we’re seeing the microbreweries chase very specific target audiences with their decorations, and that changes how consumers select their decorative packaging and which brands they go to to buy it,” says Etheridge.
According to Bruce Hanson, president, Labels & Forms, RR Donnelley, digital has emerged as a strong component at the microbrew level. He adds, though, that digital has proliferated to bigger brands, as they see greater demand for increased SKUs.

“We are seeing a digital trend that’s really high in the microbrew space, both in shrink sleeves and pressure sensitive,” says Hanson. “A lot of the embellishment can be done on the digital level, and it doesn’t require a lot of extensive setups and complex technologies. It can be inline or off-line. There are even digital assets that have embellishment models inside the asset, that can be embellished inline in the digital process instead of off-line through a finishing or converting unit. I think that’s the next biggest trend for manufacturers, deciding where they invest in embellishment opportunities and how they’re going to drive competition.”

With a small number of SKUs, microbreweries expect fast turnaround times, which also lends itself to digital printing. “There is a very high expectation for low lead times at the microbrew level,” states Etheridge. “It’s a very service-oriented segment of our business, and lead times are a big part of that. That’s driving digital usage, along with low quantities.”

Material selection also plays a big role in the success of a craft beer, and Hanson and Etheridge have seen success with both. “In many instances, it depends on what their final application methodology is,” says Hanson. “Particularly for me, on the pressure sensitive side, I went to a brewery in the not-too-distant past and they washed the can and slapped the label on right there. In that instance, it was a film-based product.”

“I see it as more of an even split, as I haven’t seen a push one way or the other,” says Etheridge. “On the bottle side, I would say there’s a lot of paper in that market since glass is easier to adhere to than aluminum in some cases. It just depends on what the brand is going for.”

With north of 8,000 craft breweries in the United States – and growing – neither Etheridge nor Hanson see craft beers slowing down any time soon. This presents greater opportunities for label converters serving this market.

“I think you’re going to find there are more people continuing to enter the market and business is going to continue to grow, but it will grow in smaller pieces and smaller segments,” notes Etheridge. “There are lots of options, meaning way less brand loyalty and flavor loyalty than ever before, just because of the variety and different ways those brands are connecting with the consumers. I think this market gets segmented 100 times over, and you’ll begin to see even more spend on packaging.”

“I think (this craft beer’s growth) is part of why we’ve made the investments we have in the last couple years, to add assets that support this market,” adds Hanson.
Related Searches