Printing for over a century, the Kentucky converter has reinvented itself as a dedicated packaging provider.

Across the Ohio River from Cincinnati, in the heart of Newport, KY, sits Steinhauser, Inc., a label company with a long, rich history. Its story dates all the way back to 1905, and it is a story of perseverance, adaptability and success. It’s a family’s story – a family that has triumphed in the face of tragedy, while reinventing itself without fear of the unknown.

Steinhauser is owned and run by Tara Halpin and Trevor Steinhauser, respectively its president and vice president, and also sister and brother. The company was started in 1905 by their great-grandfather Albert Steinhauser, when he opened a small commercial print shop in Cincinnati. Printing items such as government bonds, his business steadily grew. In the 1950s, Albert’s son Wilbur – Tara and Trevor’s grandfather – begrudgingly took over the company.

“Wilbur really wanted nothing to do with this business,” Trevor Steinhauser says. “It was actually his brother Harold who was being groomed to take it over, but then World War II came, and Harold got deployed and killed in action during the war. So Albert said, ‘Hey Wilbur, you’re up!’ And he wound up really enjoying the work.”

Despite Wilbur’s best efforts, Steinhauser’s business slowed down a great deal, but then country music star Hank Williams died. And while that certainly sounds like a non sequitur, in a roundabout way the singer’s death saved Steinhauser. Tara Halpin explains: “The company had been printing country music books that featured pictures of Hank Williams, and when he died, the book orders went from 200 per day to 5000 per day.” 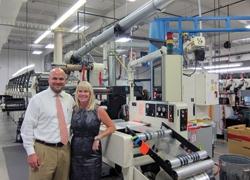 Trevor Steinhauser and Tara Halpin
“That story has been told so many times, and while it’s hard to believe, it really did save the company,” Trevor adds. “Steinhauser then got back on its feet, got some recognition and began progressing,” he says, adding that a major milestone was Wilbur’s innovation of a re-moistenable glue strip for self mailers.

The sudden success led to investment in a couple of web presses and the company’s initial foray into the print packaging business, manufacturing end-bands for bars of soap. A precursor for things to come, the health and beauty market was a Steinhauser specialty.

Bob Steinhauser, Wilbur’s son and Tara and Trevor’s father, took over the business in 1983. At this time, the company started doing its first label jobs, one- and two-color sheetfed work. “We bought the first 4-color offset presses in the area, which we used to print and laminate labels, mostly cut-and-stack, glue-applied labels,” Trevor says. “We really had one packaging customer at the time, a large health and beauty brand. But it grew into us developing a new technology with them – in-mold labels. We were one of the first to buy sheetfed, waterless equipment, and we perfected sheetfed printing on plastic.

“We were also the first in the city to get a piece of high density polyethylene through an offset press. A lot of people at the time were doing gravure or rollfed. It took a long time to perfect, and we were pioneers with this technology.”

Fast forward to early 2004, when Steinhauser’s big beauty customer decided to change to pressure sensitive labels. “We had all sheetfed equipment. No flexo at all – we had never even done any flexo printing. So our father made a handshake agreement, with this customer saying, ‘If you buy this flexo equipment, you’ll continue with our business.’ So, in our 99th year, our father made the switch and invested in our first flexo press, a 10-color 16" UV Comco ProGlide. And we made the transition flawlessly,” Tara says.

“This customer went through a total overhaul of their brand’s graphics, going from white in-mold to clear pressure sensitive. So as we got up and running with the flexo press, we redesigned their label and relaunched their brand, together with the customer,” Trevor adds. “It was a whirlwind, but it was a success. The Comco guys had said, ‘If you have good sheetfed operators and they have the mindset to change, you’ll be fine. And we had people that were excited by it, committed and ready to change.”

Transition
Times had changed for Steinhauser, and change was good. The company was in transition and moving forward. Bob Steinhauser had made the bold, successful move to position the company as a flexo label printer, and he was ready to step aside. In 2005, Steinhauser’s board of directors named Tara president and Trevor vice president, and Bob was to stay on as chairman of the board.

In the midst of celebrating its centennial anniversary in business, tragedy struck the Steinhauser family. Shortly after the shift in leadership, Bob Steinhauser was diagnosed with terminal brain cancer. “This all happened the same month we were getting this brand new piece of equipment and changing our business. By making that decision, Dad had saved our company – after 100 years in business,” Tara tearfully recalls. “So during this whole transition, we’re taking care of our father who fought for 15 months before passing away.”

The year 2008 was another emotional time for the Steinhausers, as a business and as a family, for which this company are one and the same. Tara and Trevor had purchased the company from their mother and a trust in 2007. Due to an abundance of local commercial printers, the offset business became increasingly unprofitable. Unable to support both the offset and flexo operations, they opted to sell off the offset side and become solely devoted to labels and packaging.

Changing the business model from offset to flexo involved letting go of several employees, some of whom had been with the company since Wilbur was in charge. 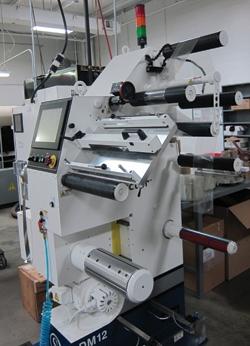 A shrink sleeve seamer
“It was the worst day of our business lives,” Trevor says of losing the employees. “But it was also something we knew we needed to do. I think a lot of companies fail when they hang on to something that they think is going to work forever and they don’t change. We probably should have done it ten years before, but there is a lot of emotion involved. It was very difficult. When we made the transition to flexo, we tried to retain as many people as we could, but a lot of them didn’t want to do it.”

With the move, Steinhauser also went from having hundreds of customers to literally having just three. The company was truly reborn.

The Steinhauser Way
Despite the new Steinhauser being only four years old and still ramping up and growing its business, it has carved out a healthy niche for itself in the label and packaging industries. In addition to traditional PS labels, Steinhauser also has full shrink sleeve printing and seaming capability, and still prints in-mold labels.

Steinhauser’s core market is health and beauty, and the company also does a good amount of labels for food and beverage, as well as some household product and nutraceuticals work. They added a second Comco ProGlide in 2008, an 8-color, all UV press, also 16". The pressrooms are sparklingly clean, incorporating Lean Manufacturing principles as well as safety measures such as a comprehensive matrix removal system.

Staying on top of the label industry’s dominant trends, Steinhauser added an HP Indigo 6000 digital label press in 2009. To accommodate the digital press, the Steinhausers built new a climate-controlled digital pressroom within their 36,000 square foot facility.

“We went digital to be able to answer to the just-in-time and short run demands of our customers. We have a large international health and beauty customer that also needs a lot of multiple language labels. We say, ‘Okay, we can print your millions of labels, but also when you need only 5000, we can do that too. The digital makes these jobs most efficient,” Trevor says.

To complement the Indigo, there’s a roll-to-roll AB Graphic finishing machine equipped with two flexo heads for foil and metallic printing. The Comco flexo machines can print up to three silkscreens.

Proud of their facility, the Steinhausers encourage customers – the majority of whom are local, small to medium sized businesses – to visit and observe the machinery firsthand, which usually seals the deal. “As soon as we get them here, it’s hard for them to say no,” Tara says. But the Steinhausers are perhaps more proud of the family atmosphere that they impart to both their customers and employees.

“The culture here is family first, with an emphasis on communication,” she says. “We start each week with the ‘Steiny Scrum’. (Tara is a former rugby player.) We take ten minutes to discuss all of the things that happened the week before, and we give everyone a chance to voice any concerns they have. We’re just trying to get everyone on the same page. For example, we recently had a meeting where our operations manager discussed with the staff what it costs to run a label plant. We talked about how much rolls of material costs, plates, etc., so they have an idea about the cost of label waste.

Steinhauser’s AB Graphic digital finishing machine
“We’re out there on the floor talking to the pressmen. We want their input on how we can do things better. And we discuss with them and make clear what our customers expect, and also get them involved with any new prospects we have. We try and make everyone better,” Tara says.

Since they were kids, Tara and Trevor have been involved with every facet of the company, such as customer service, sales and marketing. Today, they’re both actively involved in sales. The Steinhausers also like to partner with their customers’ packaging projects right from the get go. “We want to be involved. If you’re planning on doing a packaging re-launch in a few years, show us. And if there’s something we need to do R&D on, then when you’re ready, we’re ready,” Tara says.

Marketing is an area where that they’ve started paying special attention to. Steinhauser recently added a full-time marketing coordinator. “We’d never had a dedicated marketing program before,” Trevor says. “But when we got into digital, one of the resounding themes was that you’ve got to have a marketing program to capitalize on all the small business prospects out there.”

Steinhauser recently got some great exposure when it was featured on “Manufacturing Marvels” – a two-minute television segment that aired nationally on the Fox News Business Channel. The short film, which is also on YouTube, takes an educational look at the company’s label printing and packaging operations.  The company is also certified as a Women’s Business Enterprise through the Women’s Business Enterprise National Council (WBENC), the nation’s largest third-party certifier of businesses owned and operated by women in the US.

The Steinhauser motto is “Passion for Packaging.” Tara and Trevor are passionate about what they do and thrilled with not only the dynamics of the label industry, but also the people. Relative newcomers and now TLMI members, they’re enjoying the industry’s networking and collaborative opportunities and have an eye toward continuous improvement and future growth – four generations and 107 years strong.
Related Searches