During FTA’s Awards Banquet, APR president and CEO Dave Nieman was inducted as the 57th member of the association’s Hall of Fame. 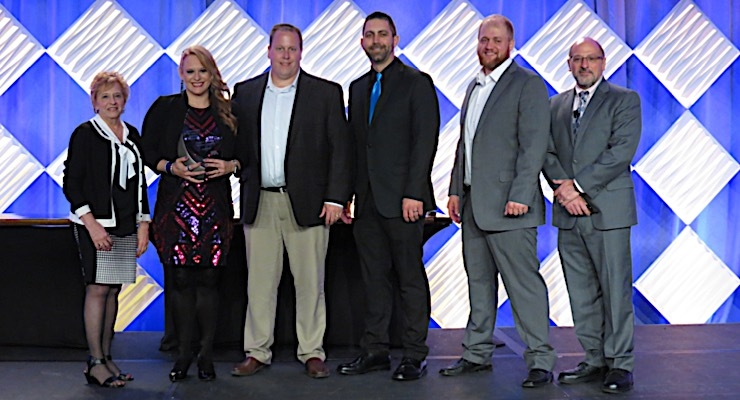 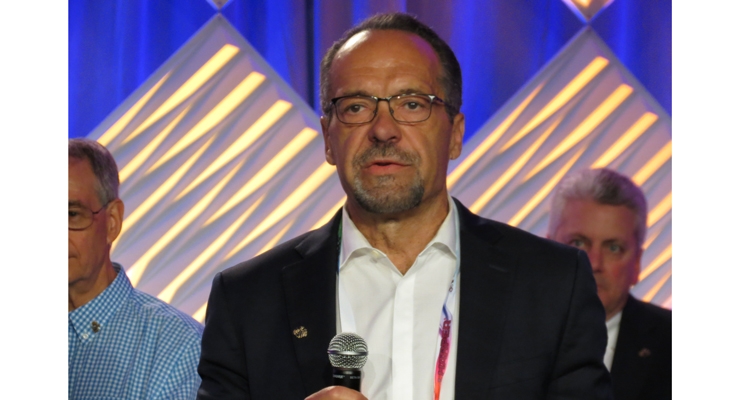 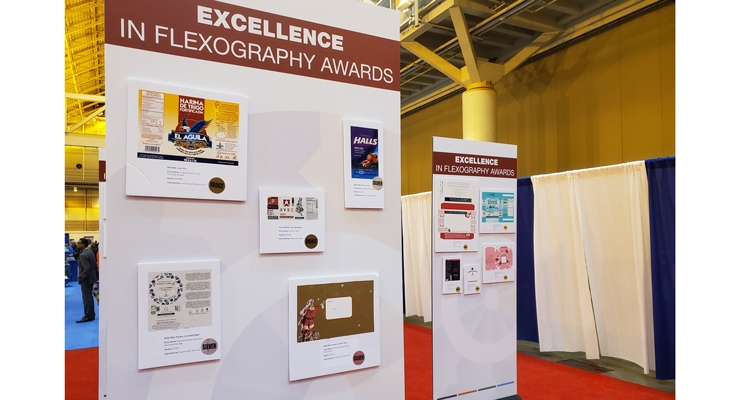 The 2019 Excellence in Flexography Award winners were on display at INFOFLEX.

Flexographic Technical Association (FTA), the association dedicated to the advancement of the flexographic printing process, revealed the winners of its 2019 Excellence in Flexography Awards Competition at the FTA Awards Banquet, an event held in conjunction with Forum & INFOFLEX 2019. The 124 winners were revealed on large overhead screens in the Grand Ballroom at the Hilton New Orleans Riverside Hotel, including the six Best of Show prints, while guests enjoyed the region’s boldly flavored cuisine.

As package printing technology continues to become more advanced, the entries were worthy of their titles. Kicking off the first night of FTA’s May 5-8 Forum & INFOFLEX 2019, winners consisted of: 39 gold awards, 41 silver awards, 40 bronze awards, 3 self-promotion awards and 1 non-traditional award.

Best of Show designees (selected from the gold-award recipients in their respective categories) in the 2019 Excellence in Flexography Awards included:

Mac Papers Envelope Converters Inc for the Midvalley Museum of Science the Universe Has Never Been Closer Envelope in the envelope category.

Award winners were displayed May 6-7 at INFOFLEX 2019 in the Awards Gallery at the Ernest N. Morial Convention Center in New Orleans.

APR’s Dave Nieman a Hall-of-Famer
During FTA’s Awards Banquet, All Printing Resources (APR) president and CEO Dave Nieman was inducted as the 57th member of the association’s Hall of Fame.

According to FTA, “Both a business man and a family man, Dave is a genuine person with everyone he meets. Whether he was coaching his daughter’s soccer team back in the 1980s, or leading his work team as president/CEO today at All Printing Resources, he understands and appreciates the strength that every player or employee brought to the field, or brings into the office.”

That level of integrity has spilled into his involvement with FTA for the past 30 years. Before internet and emails simplified communications, Nieman was involved in setting up regional workshops across the US. As the workshops phased out, he took on more and more, serving on the FTA Board of Directors and FFTA Board of Trustees for two consecutive three-year terms from 2004-2010, as FTA vice chair, suppliers and FTA Board chair. He was a member of the TEST Oversight Committee, FTA Strategic Planning Initiative and provided guidance in the formation of the Leadership Council. He played an active part in the FFTA Scholarship Committee, too.

“The first thing that comes to my mind is what a generous person he is, always thinking about everyone else besides himself first,” shared Nieman’s wife of 39 years, Eva. Still very much a family man, every year they rent a house with their three children, spouses and three grandchildren for a long weekend, managing to continue maintaining a balance of family and work after all these years and expansion of family members.

In the Heavy Metal category, a 2019 Technical Innovation Award went to Paper Converting Machine Co (PCMC) for SteadyPrint, a combination of hardware and software that reduces bounce, improves press speeds by 200-400% and reduces waste by 35%. In addition, SteadyPrint eliminates overimpression and can print bounce jobs with a light kiss between rolls through a wide range of press speeds. It has less press vibration and noise, mandrel bearings that operate at a cooler temperature and continuous printing through different speed ranges without adjusting impression, while delivering real-time feedback on print quality by implementing a disturbance-canceling algorithm on the software side.

In the Prepress Graphics category, a 2019 Technical Innovation Award went to Esko for its Print Control Wizard (PCW), a wizard-driven software used in prepress that automates the role of the color expert. It generates excellent screens and curves for any application, allowing for plates to be identical. The company worked closely with plate manufacturers from around the world for nearly two years to build an accurate database of specifications for PCW, outputting screen algorithms called Esko Crystal Screens. What would typically take more than an hour to do, can now be done in 10 to 15 minutes on average.

In the Prepress - Pressroom category, a 2019 Technical Innovation Award was given to Koenig & Bauer Flexotecnica for Augmented Reality-DataGlass Remote Support. It provides remote support personnel the ability to experience what a printer’s technical team sees and hears in real time, improving the time in which technicians can fix issues and instantly provide support. The project took approximately 18 months to create, modify and rework parts of the hardware and software so it can work with different devices and machines. The device has a noise-canceling microphone, WiFi and Bluetooth, and battery built into a band that wraps around the sides and back of a press technician’s head with a camera mounted over the right eye to allow for hands-free operation. This product has reduced the number of on-site service calls and provides remote support with a clear understanding of what parts to bring along if an on-site visit is still necessary. Plus, calls are recorded and accessible for the technician to watch and rewatch, if needed.

Trophies were given to a representative from each company, accepting the honor as FTA commemorated achievements made for all three new technologies. FTA expressed congratulations to all organizations that entered this year’s competition.

President’s Award Winners
FTA honored two important individuals of the FTA membership base with the 2019 President’s Award. Katie Graham of Pamarco and Danny Rich of Sun Chemical Corp were each recognized at the Awards Banquet, held in conjunction with the Association’s Forum & INFOFLEX 2019 inside the Grand Ballroom at the Hilton New Orleans Riverside Hotel.

Graham, who served as the marketing and communications manager at Pamarco, is an avid member of the FTA Supplier Leadership Council, Membership Committee and Emerging Leaders Committee. Even more recently, Graham has signed on to co-chair a brand new initiative with Nona Woolbright, “Women in Flexo,” that held its first meeting at Forum 2019. Graham’s eagerness to help is a prevalent theme in all she does for FTA, including her participation as an expert judge in the FTA Excellence in Flexography Awards Competition.

“I appreciate the exposure to so many different areas of print. Most of all, the experienced team of judges I get to work with has made a big impact on me,” said Graham. “Working with a legend like Arleen Neustein, hearing her perspective as a woman within this industry (and before it was cool to be a woman in this industry) has been a privilege.”

Danny Rich is the senior color physicist in the Color Research Laboratory at Sun Chemical Corp. The value of his contributions to FTA, including his work with the Flexo Quality Consortium (FQC) as a founding member of the Standards Working Group (SWG), and most recently joining the FQC Executive Committee, Rich’s commitment to the association is immeasurable, according to FTA.

Past President’s Award recipient and chair of the FQC Executive Committee, Jean Engelke, shared that Rich has “the unique ability to break down very complex technical concepts and present them to FTA members so that they are able to understand them and, often times, do so with a high degree of humor and entertainment,” Engelke said.

Excellence in Sustainability
FTA also announced during Forum in New Orleans the recipients of the 2019 Sustainability Excellence Award. This years winners are IGT Global Solutions, for its volatile organic compound (VOC) reduction program, and Comexi, for Life Cycle Analysis (LCA) of its F2 MC flexo press.

One of IGT Global Solutions’ primary products is instant lottery tickets. IGT wanted to produce a more sustainable printing operation that would have less of an environmental impact, increase press efficiency, reduce operational costs and minimize hazardous waste. The company received a 2019 FTA Sustainability Excellence Award in the Sustainability Programs category for implementing a VOC reduction program in its flexographic printing operation, transitioning from using solvent inks to a full water-based ink system.

After the transition to a full water-based ink system in 2017, 2018 was the first full year IGT used this new system. In addition to using full water-based ink, IGT experienced optimized job changeover times, minimized materials waste and increased print quality. The printer reduced VOC output in 2018 by 66% when compared to 2015. IGT has also experienced 40% sales growth.

The second winner, Comexi, began developing the LCA as a decision-making tool for its F2 MC flexo press in 2017. It is the first part of this project that earned this company a 2019 FTA Sustainability Excellence Award in the Innovations in Sustainability category. Promoting healthier working conditions, the LCA examines the environmental, social and economic impacts of the machine in order to make improvements across the board.

Creating a tool that can quantify and compare a project’s environmental impact usage and the entire life cycle of the F2 MC, Comexi says the data collection has yielded environmental improvements in every aspect of the machine’s use, from beginning to end. Aside from having a positive impact on the engineering departments, other areas of Comexi have also been positively affected, including sustainability, procurement, marketing, and technical and operational teams.

FTA includes 1,350 member sites representing more than 35,000 individuals. Foundation of FTA, founded in 1974, is the educational arm of FTA and is dedicated to supporting and advancing the flexographic industry.
Related Searches
Suggested For You 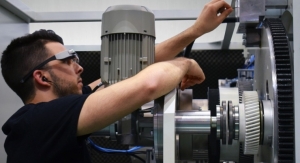 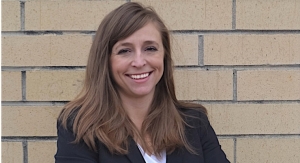 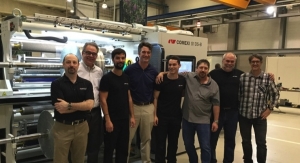 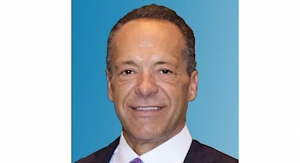 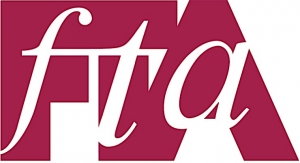 FPA announces 2019 Board of Directors