Who will bet on offset? 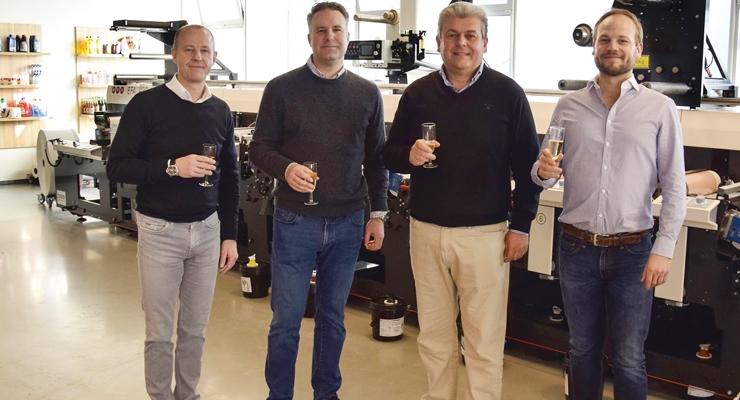 With elections coming up in France (municipal) and in Germany (regional), there is much talk about front-runners and who will gain if so-and-so pulls out. In the narrow web printing world, flexo and digital make the running, outdistancing all other technologies in both media coverage and sales. But offset is still a force to be reckoned with.

Mark Andy, Gallus and Nilpeter all offer a range of offset presses. They are coy about saying how many presses of each technology they sell, but at least some of their customers are going for offset. They include Lithographie Billet in France, which already runs flexo and digital presses, and has recently installed a Gallus RCS 430 offset line. The new press has six offset stations, with three that can be used for screen or flexo. It is Billet’s first venture into rotary offset.

So, the question to answer is with all those flexo presses (Billet has four), why install a mainly offset line? Surely not to reduce investment – the new Gallus, with all its bells and whistles, cost a cool $2.2 million. CEO Arnold Derégnaucourt explains, “We already have a semi-rotary offset press, but the new Gallus runs twice as fast and is particularly good at high-speed printing on structured surfaces, and on things like PE 120 micron.”

But pride of place, according to Derégnaucourt, must be given to the inline hot foil unit supplied by Pantec. “Now, in a single pass, we can print up to three different hot foils onto the same label. First trials of the new press show that it can achieve multiple hot foils at 120 fpm, or more than twice as fast as with the older press.”

And as 30% of all French champagne bottles carry labels from Billet, the gain in productivity is significant.

How did some of the big labelstock producers make out in 2019?
Alone among the big market leaders, Herma is vertically integrated, making (mainly) labelstock, but it also has a strong presence in labeling equipment and labels. Financial figures just out show the Herma Group growing by around 1% in the 2019 financial year and increasing its sales to $410 million (EUR 364.4 million). Herma plans a “sporty plus” of 5% for 2020 but sees great uncertainties due to incalculable trade and global political risks.

A new coating plant is about to start operation – and this will create valuable capacities in the high-turnover self-adhesive material business. With the present world economic slowdown due to the coronavirus, Herma may need to trim its expectations for 2020 to a less sporty figure, despite having its main markets in Germany, a country so far less affected by the virus.

Of all the majors, Avery was in the past the most dependent on labelstock, but 2019 figures show that non-labelstock divisions (notably industrial and healthcare materials and information solutions) now account for just under half the group’s worldwide sales.

See you later
The downturn in the label business due to the virus will probably be aligned – which is bad enough – to the expected falls in GDP. The exhibition and conference sector are looking ruin in the face, as cancellations are snowballing. Two weeks ago, the label association FINAT canceled its technical seminar, which was to be held in Barcelona on March 4-6. Messe Düsseldorf has canceled all its fixtures for March and April, and has just announced that both Interpack and drupa are to be postponed to the spring of 2021.

On first receiving this news, you can almost feel the cold sweat running down the backs of the more than 10,000 exhibitors who have already paid up front for these shows – and almost hear the lip smacking of litigation lawyers.

Your correspondent was scheduled to visit Denmark in April to say hello to the Little Mermaid and to visit Vetaphone, who are bringing out a new product range. Among the company’s latest innovations is a treatment unit “fitted with eight high-power and high-efficiency ceramic electrodes, giving more power per square meter at higher press speeds.”

Sounds good, but the product presentation had to be postponed, and the irony of it is that Vetaphone’s key products, as most of you will know, are machines for…corona treatment.

The show must go on
Label converters are still innovating: one of them is Abbey Labels in Britain. Working with press manufacturer MPS and finishing specialist AB Graphic, Abbey has developed a semi-rotary diecutter, which it says is “a game-changer for the industry.” First developed by ABG for a digital press, the diecut unit has now been kitted out with new software and built into the MPS press just delivered to this UK converter.

“With a top speed of 450 fpm and a repeat of up to 508mm, the new semi-rotary diecutting module enables the speed of cutting to be more than doubled,” says Abbey chairman Tom Allum. “Traditionally, diecutting can become a bottleneck, as it slows down the speed of the press depending on the size of the die repeat, but with two anvils in operation on the Fast Track, this is no longer the case. It is also much quicker to change the die, as the magnetic cylinder stays in place at all times.”

Most readers will know MPS and ABG, but not all will recognize the initials IIJ. This small but very hi-tech company, based in Cambridge (the one in Europe), makes mostly one-off customizations for industrial inkjet systems, using Konica Minolta hardware plus a lot of IIJ’s own ingenious tweaking. It has just launched its wider Monoprint 775i model, which prints in up to four colors at up to 845mm print widths using 360dpi KM1024i printheads. IIJ promotes this new equipment as being “perfect for wider packaging applications such as cartons, foils or flexible films, as well as décor applications.”

The study looked at non-liquid FMCGs in Europe and concluded that if they all used flexible packaging, there would be a 70% reduction in total primary packaging. What’s more, by using a life cycle assessment (LCA) approach, the study claims to show that such a theoretical substitution would decrease the total Global Warming Potential of all European non-beverage FMCG primary packaging by 33%, “….even if it were assumed, for the purpose of the demonstration, that no material recycling processes for flexible packaging would take place.”

This percentage seems a little unlikely, though Europe’s flexible packaging manufacturers are not rushing to dispute it.

How black is a black ink?
Marking and coding is often looked down upon as the poor relative of the label and package print sectors. All those boring black barcodes and QR codes. But for Markem-Imaje, with headquarters in France’s Rhône valley, black ink is their bread and butter business.

Readers of L&NW will not need reminding that most coding and marking uses continuous inkjet technology, rather than piezo. Apart from being very black, marking inks must ensure high printing precision, low odor, low consumption, and must print well on a very wide range of substrates, including cartonboard, PE, PP or PET. Quite a challenge. But in addition, we in Europe have a labyrinthine maze of regulations to say what chemicals you may or may not use on food packaging. There’s REACH, the Swiss ordinance, the Nestlé pratique and a few others you probably don’t want to know about.

Now, Markem-Imaje says it has the ultimate answer in its new alcohol-based FB655 ink. According to the manufacturer, it ticks all the boxes and avoids using any of the traditional solvents like MEK. Among ink producers, Markem-Imaje is medium-sized with sales of $140 million but is probably the nearest France has to a homegrown ink maker – except that for 20 years it’s been a subsidiary of Dover Corporation, Illinois.

Keeping the wheels of industry turning during the pandemic
In the main West European countries, all employees enjoy compulsory unemployment insurance. Health insurance, of course, covers everybody. This will ease the burden on family finances over the difficult months to come.

For sectors like the label industry, with many small and medium businesses, this, however, is cold comfort. Owners foresee falling sales, parts shortages and the difficulty of replacing key staff who go sick. To palliate business’ problems during the present crisis, European governments are bringing up the big guns: loans, tax breaks, incentives for teleworking, in short, anything to keep countries’ industrial tissue intact, whatever the cost to the public purse. Will it work? That depends on how long the pandemic lasts. And that, alas, is anybody’s guess.
Related Searches