The Maryland converter has a rich history and bright future ahead. 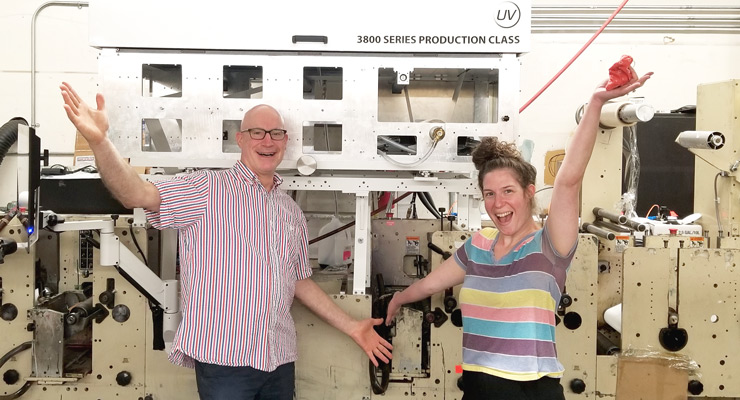 Alan and Rebecca Rich celebrate the recent installation of a Colordyne 3800 Series UV – Retrofit, which will open up new markets for Nova Label. 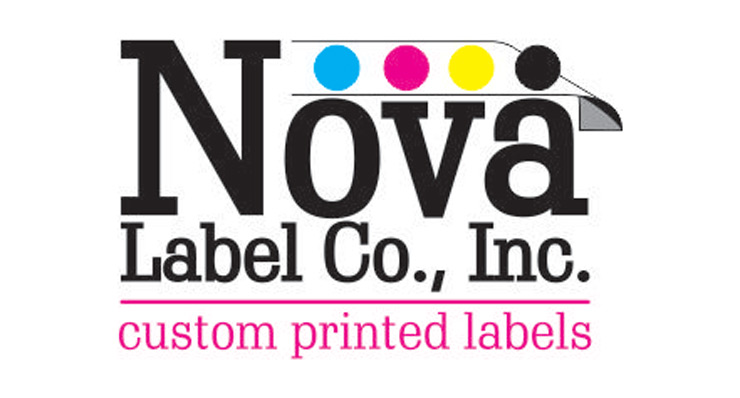 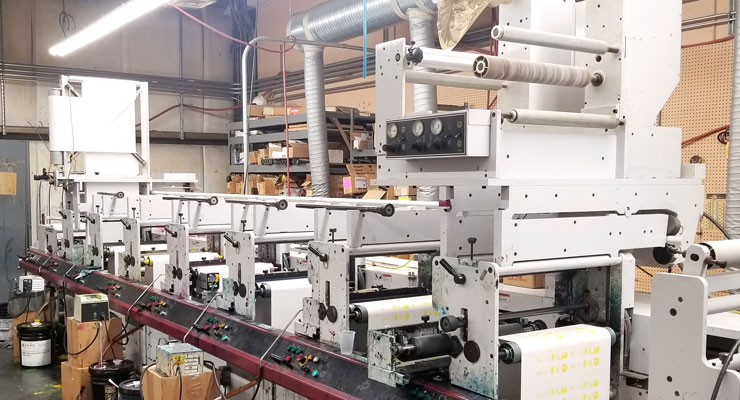 Nova Label relies on Mark Andy flexo presses, and the companies have enjoyed a successful partnership that spans more than 30 years. 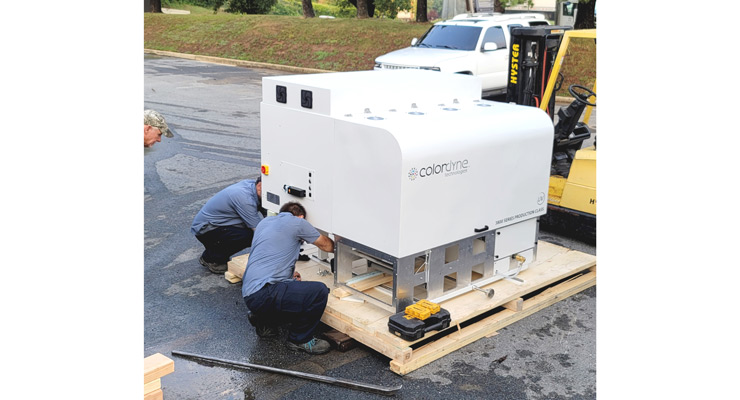 Alan Rich has seen it all with Nova Label Co., Inc. From joining the company in the early 1980s to guiding the team through several significant technological investments, he has helped engineer the growth of this Maryland-based label converter. His moves have continued to pay big dividends, as the company has seen sales increase by 10% in 2021.

Alan joined the company not long after its founding. His father-in-law, Sandy Bernstein, established Nova Label in 1982. Sandy was not new to the label game, though. In fact, he had worked in the industry for some 30 years before setting up shop in Maryland. His wide range of roles included Nashua Corporation in New Hampshire and Epsen Hillmer Graphics in Nebraska. Sandy crisscrossed the country selling labels to supermarkets, food manufacturers, and data processing firms. His final pit stop saw him land in the Washington, DC area.

“Sandy’s customer connections bought and stored a 7", 2-color Allied press, and for a number of years they were trying to coax Sandy into opening a label plant locally,” says Alan. “At the time, Sandy had a lot of the retail supermarket work at Giant Food. The deal was going to be if Giant would move their business to this new company, then he could start up. They did, and that’s what led to the founding of Nova Label.”

Alan, who was dating Sandy’s daughter, Bonnie, whom he would eventually marry, at the time, began working summers at the newly-formed company. During his college years, Alan would work in finishing, run the slitter and do fan folding.

“Because the building was a regular warehouse with no dock, we’d have to unload the trucks by hand when the paper shipments arrived,” says Alan. “Well, the days I worked, inevitably, I helped unload these rolls of paper off the truck. That was not fun.”

As Alan began to get a feel for the label business, he increasingly envisioned a career in this field. “When I was in college, I didn’t know what I was going to do,” adds Alan. “When I came to work here, my mom asked, ‘You can make money selling labels?’ And it’s a fair question because most people don’t know the industry. But when you go to the store everything has some kind of label on it, be it glue-applied, pressure sensitive, in-mold and so on. It’s a label that’s on that container but nobody thinks about it.”

For this company, labels made good business. For the first two years, the converter was headquartered in Tyson’s Corner, VA, but made the move to Maryland to be closer to Giant’s Landover facility. Nova Label began with 2,500 square feet in 1984, and shortly thereafter Alan joined the team full-time in 1985 to cultivate new sales beyond what was being produced for Giant Food.

The company started with the 7", 2-color Allied press and an Arpeco slitter rewinder before adding more equipment. In 1990, Nova Label had three presses and two slitter rewinders, but the technology was in need of an overhaul.

“We were at a crossroads and needed to upgrade our press equipment,” recalls Alan. “We were going to buy another Allied press, but we brought Mark Andy in to consult. We saw the 2200 and ended up going with Mark Andy. The 10", 6-color was our first Mark Andy press, and then we bought a second one exactly like it in 1995. We added a 10", 10-color Mark Andy press in 1996. By the time it was the mid-to-late 90s, we had three Mark Andy presses. I’d find jobs that were 3-color, 4-spot color, 4-color process, and that’s what spurred buying the Mark Andy. You couldn’t do 4-color work easily on the old Allied equipment because the aniloxes were bolted in and the jobs would take all day. We decided if we wanted to grow, we had to buy new equipment.”

Being successful in the company’s growth, Alan took over the day-to-day activities from his father-in-law in 2000 when Sandy and his wife, Florene, semi-retired. “Sandy is still involved with the financial side of the business, and we’ll discuss big purchases,” says Alan. “Sandy understood when I said we needed to upgrade to new equipment, and after asking a lot of questions, he didn’t really bat an eye. He just wanted to know how these moves were going to help us, and he was willing to take those chances.”

In 2003, Alan continued to expand the business, adding a 20" Mark Andy 4150. Equipped with a range of printing modules from Mark Andy, Nova Label was ideally situated to handle any kind of print job.  “We made a label that went onto a Costco cheesecake box,” comments Alan. “The job started off being a pressure sensitive label affixed to the lid, then Costco wanted the entire box decorated, so I partnered with an offset printer, where they printed the sheet and would then have it laminated and diecut into boxes. We had that account for years, and we were producing 10,000 box labels a month because they were selling a ton of cheesecake.”

Nova Label has broad expertise in labels for packaging, marketing and variable data. The company does an extensive amount of work in the direct marketing space. Plus, being located in the Washington, DC non-profit and association region, the converter runs labels, stickers and decals for a wide range of local and national campaigns.

Today, Nova Label occupies 10,000 square feet at its Cheverly facility. Alan’s daughter, Rebecca, came on in September of 2019 and has integrated well with Lisa and Rondell, the company’s production and operations managers. Rebecca is the sales coordinator, managing customer inquiries and order tracking. She has also trained to operate the digital press and has assumed supervising digital press production.

The road to digital
A big part of Nova Label’s recent success has been its foray into digital. This move did not happen overnight, either. Alan began monitoring the digital printing market back in 2003 as the technology began to emerge. With so many different solutions coming to market, nothing at the time was going to be a good fit for their business model. Nova Label doubled down on flexo and invested in the Mark Andy 4150. For the next 14 years, Alan continued to keep an eye on the latest digital trends.

In 2016, Nova Label installed a Memjet retrofit through IPT. “We installed the retrofit on a working Mark Andy press,” says Alan. “The process to schedule and run digital jobs was hit or miss because we were so busy with flexo work on that press. We couldn’t schedule digital time on it. After about a year, I realized I had to set it up on its own press. I bought a used 4-color Mark Andy 2200 with an accessory module and integrated the retrofit within the press.”

The press ran for five years and handled a significant amount of Nova Label’s direct mail work along with a variety of food packaging labeling. Having had success with a retrofit, it was time again to consider upgrading to new technology.

“That machine made us quite a bit of money, but it was expensive to run,” states Alan. “I made the right choice to go with the retrofit because of floor space, and it got our feet wet with digital at an affordable investment. It was the best choice when you have a press on the floor and all the tooling that goes with it. If I had gone with a traditional digital press, I would’ve needed two pieces of equipment: the printer and the finisher, as no one was actually doing inline converting at the time.”

When it came time to upgrade, Alan met with Colordyne Technologies at the 2019 TLMI printTHINK Summit. Nova Label had been running water-based inkjet, and the company targeted UV inkjet with its new equipment.

“We had to do something different because we were maturing out of aqueous inkjet, and Memjet was developing new pigment ink technology,” says Alan. “I met with Colordyne, and Taylor (Buckthorpe) explained the new system, and at the time, the 3800 UV inkjet wasn’t completely developed, but he showed me the concept.  We were talking about the new Memjet system for months, and based on what kind of issues we were experiencing, he explained that we should go UV inkjet to get where we wanted to go.”

After seeing the technology in action, comparing it to two other digital press brands and evaluating samples, Alan opted for Colordyne’s 3800 Series UV – Retrofit. In addition to improved durability on its labels, the technology will allow Nova Label to target markets it previously could not, such as craft beer. The retrofit features 4-color process and white, but it’s expandable to seven colors in the future if needed.

“The durability of the UV inks and using standard materials was a big advantage, so I think the future looks really bright for that unit and its technology,” states Alan.

“I’m excited to see how this new press works for us,” says Rebecca. “The UV inkjet will be really cool, so we shouldn’t have any problem with bleeding that we experienced with the previous system. We should be able to do more fun things for markets like wine and beer while using labelstock that we use for flexo. This move should open up things for our business.”

“For what we need to do, Colordyne made the most sense,” Alan adds. “They’re a good company and Taylor’s been great. They’ve answered all our questions, and the technicians know the machinery inside and out.”

Getting involved
Alan has been a pillar in the label community since his early days with Nova Label. In addition to being a TLMI member, Alan is one of the original members of FLAG (Flexo Label Advantage Group).

“FLAG is indispensable,” notes Alan. “The relationships that we’ve created with other converters have been great, and there’s so much diversity in product mix. Everyone is open and willing to help others. The first Annual Meeting was 8-10 members around a table, and we were waiting for someone to say something, and finally we got talking. It took a while for everyone to warm up, but as it turns out we all did different things and talked freely about a lot of topics. Nobody is in this to think you’re going to steal business from anybody else. If you do the bare minimum, it’s a win-win. If you’re using the vendors and you’re already buying product, FLAG is doing all the heavy lifting with paperwork. If you’re buying paper, ink and dies, you’re going to be on the plus side.”

Nova Label has taken advantage of the FLAG network, as it leans on all the suppliers of paper, ink and tooling.

Nova Label has also utilized its connections at both FLAG and TLMI to help with the company’s sustainability journey. “I think sustainability is important for the company and for our customers,” says Alan. “It’s just another area where customers ask what we do for sustainability, and they themselves are asking to use recycled papers, recyclable materials and compostable materials. If I tell them that all of my waste is recycled in some fashion, I think for a lot of my customers that goes a long way. If I can reduce landfill waste, I’m doing a good thing for our business and the environment.”
Suggested For You