C&M Conveyor – Mitchell, IN, USA – C&M Conveyor has announced the appointment of Tony Leckie (3) as its new regional sales manager for the Western Territory, including California, Arizona, Nevada, Oregon and Washington.

Case Paper – Harrison, NY, USA – Tim Resser has joined Case Paper as general manager of the CA division. He is replacing the division’s general manager, Marty Rosenbaum, who plans on retiring in a few months. Kim Guarnaccia has also joined the company, and she will serve as marketing director.

Durst – Rochester, NY, USA – Larry D’Amico has joined Durst North America as the company’s director of sales. He served as vice president of Digital Imaging for Agfa Graphics for the last five years.

Goebel IMS – Darmstadt, Germany – Goebel Schneid- und Wickelsysteme GmbH, part of the Italian IMS Deltamatic Group, has appointed its new management board. Roberta Ghilardi will be in charge of administration and finance; Peter Bauer will serve as managing director of operations; and Harald Knechtel is the new managing director of worldwide sales and marketing.

Infigo – Crawley, United Kingdom – Infigo Software has announced the appointment of Craig Hath (4) to president of the company’s North American operations. The company is focusing on expansion to the United States and Canada.

Mark Andy – St. Louis, MO, USA – Mark Andy has appointed Shaun Pullen to director of Asia-Pacific sales. This position has been created to support the company’s customers and increased coverage with the goal of growing market share for Mark Andy and Rotoflex. Mary Sullivan (5) has also been appointed to regional sales manager, assuming responsibility for sales of Mark Andy presses in the West Coast territory. Ralph Boer will take on the role of digital sales manager, a strategic position focused on further developing and supporting the installation base of the market-ready Digital Series.

Maxcess – Guangdong, China – Nang Young will take over as the new vice president and general manager of Maxcess China.

Microscan – Renton, WA, USA – Microscan has named Dan Barnes the vice president of operations. He has been a key member of the management team in his 21 years with the company.

Trinity Graphic – Sarasota, FL, USA – Ida Iacovetti has been hired as the national business development manager to develop and expand the company’s customer base throughout the United States.

Xeikon – Eede, the Netherlands – Xeikon has appointed David Wilkins to vice president of sales and marketing in the US and Canada. His new role is designed to spearhead growth, and he will report directly to CEO Wim Maes, who says, “We welcome Dave to our team and look forward to expanding the reach of our leading edge technology through his visionary market approach.” 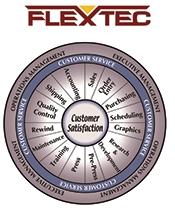 Flextec’s newly appointed director of operations Jeff Collins headed up the team tasked with achieving GMI certification. He comments, “It was a huge effort and in the end we are better for it.”

Collins adds, “We realized three major benefits from obtaining this certification. First, we became much more sophisticated in our color management process. Second, although we had decades of printing experience in-house, most of it was in our heads. After going through the GMI process, that knowledge and experience is preserved. Lastly, the process brought our team of professionals closer together – from prepress through finishing. We are all working from the same sheet of music and with a common goal – the best possible quality for our customers each and every time.”
Related Searches